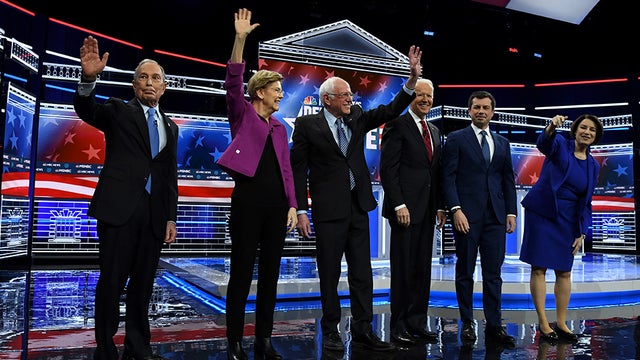 It was fight night in Las Vegas on Wednesday at the Paris Hotel and Casino. The 2020 Democrats didn't hold back, battering one another in a brutal slugfest ahead of the Nevada caucuses.

Here are five takeaways from a gripping night in Las Vegas.

Bloomberg gets a taste of reality

It’s hard to imagine how the first debate for the former New York City mayor could have gone much worse for him.

Bloomberg knew his rivals would be coming at him for his stop-and-frisk policies as New York mayor and over allegations that he’s overseen a toxic workplace for women.

But Bloomberg didn’t have adequate responses for either, leading to excruciating exchanges that ended poorly for him.

“A billionaire who calls women fat broads and horse-faced lesbians – and no, I’m not talking about Donald Trump - I’m talking about Mayor Bloomberg,” Warren said. “Democrats will not win if we have a nominee with a history…of harassing women and supporting racist policies like redlining and stop and frisk….Democrats take a huge risk if we substitute one arrogant billionaire for another.”

Later, Warren came back for more, demanding that Bloomberg release women who have worked for him from the non-disclosure agreements they signed. After several rounds of back and forth, Bloomberg ceded the exchange with an eye roll.

Everyone on stage took their shots at Bloomberg, accusing him of buying his way on stage, implementing racist policing policies, condoning misogynistic behavior and making past sexist remarks, as well as hitting him for his past a Republican.

The former New York City mayor has not debated in years and the rust showed, while his rivals, who are on their ninth debate, were sharp and delighted in cutting him down.

Bloomberg has sailed to the top of the polls while running a parallel general election campaign that has primarily existed on the airwaves, backed by his hundreds of millions of dollars.

He got a dose of reality on Wednesday night, getting drawn into the fray and pummeled by his rivals, raising questions about whether he can carry on as the great hope for mainstream Democrats who are eager to stop Sanders.

The Vermont senator will enter Saturday as the favorite to win the Nevada caucuses, boosted by his support among Latinos.

Sanders has already moved on to campaigning across California and Texas – two massive, delegate-rich states that will vote on Super Tuesday on March 3.

A victory in Nevada on Saturday will ignite talk about whether he can be stopped.

Nothing happened on Wednesday night to blunt his momentum.

In fact, it’s possible that the presence of Bloomberg, a billionaire with a lot of baggage, was a perfect foil for Sanders, positioning him to make the progressive case on everything from money in politics to raising taxes on the wealthy and "Medicare for All."

The anti-Sanders movement is about to go into overdrive

There is a vocal contingent of Democrats who are warning that nominating Sanders will lead the party to electoral disaster in November.

The Vermont senator is despised by establishment Democrats, including some of the panelists and hosts with top perches on the cable news shows. Many of the attacks Sanders faced on Wednesday night had been telegraphed in the days leading up to the debate.

Sanders’s health – he suffered a heart attack last year – will be under the microscope, which will likely fuel new demands that he release his full medical records.

The so-called “Bernie Bros” – Sanders’s online supporters who have a reputation for nasty online attacks on his rivals - have become a focus of his detractors.

And Sanders’s embrace of socialism will be a persistent line of attack, as mainstream Democrats warn that it will be ballot box poison against Trump in November.

Perhaps the most telling moment of the debate was that none of Sanders’s five rivals said that the person with the most delegates going into the convention should get the nomination, an indication that they’re spoiling for a convention fight even if he comes in with the lead.

As desperation rises, candidates go on the attack

Several candidates had their backs against the wall and it showed with a high energy, scintillating and, at times, vicious debate that was by far the most entertaining and illuminating of the primary season.

Warren put in the kind of debate that will have people chattering about a comeback.

The Massachusetts Democrat set her sights on taking down Bloomberg and seemed to blindside the former New York City mayor with the bluntness and ferocity of her attacks.

Buttigieg narrowly triumphed in Iowa and came in a close second in New Hampshire, but he faces real questions about his ability to grow his base of supporters by drawing in voters of color who have so far shunned his campaign.

Buttigieg squared off repeatedly with Sanders, who he cast as a rigid and uncompromising ideologue, as well as with Sen. Amy Klobuchar (D-Minn.), who he’s working to fend off in the centrist lane of the primary.

Not all of Buttigieg’s attacks landed. He infuriated Klobuchar at several points in the debate, setting her up for cutting and memorable comebacks.

“Not everyone is as perfect as you, Pete,” Klobuchar said at one point.

Buttigieg and Klobuchar appear to genuinely dislike one another.

But all of the candidates realize that the race could be decided in two weeks, when about one-third of all delegates are allocated on Super Tuesday. They’re leaving it all on the field, setting up a potentially brutal two-week stretch that will test party unity.

Another debate, another night dominated by arguments over Medicare for All.

The issue energizes the grassroots base like none other. It may have been the reason behind the decline of both Sens. Warren and Kamala Harris (D-Calif.), who both equivocated at times and quickly saw their support crumble.

The left badly wants to elect a candidate that is committed to completely overhauling the health care economy to pave the way for Medicare for All.

The moderates are warning that ordinary Americans will be turned off by the prospect of losing their private plans.

The winner of that debate could determine not just the Democratic nominee, but whether the party is able to defeat Trump in November.