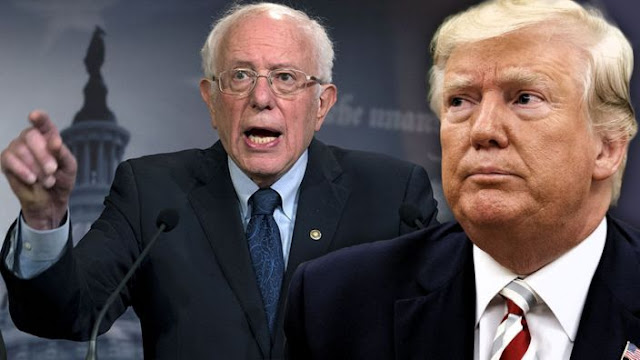 Sen. Bernie Sanders (I-Vt.) on Friday acknowledged that he was briefed by U.S. intelligence officials about Russian attempts to interfere in the 2020 elections, with The Washington Post reporting that Russia has sought to help his presidential campaign.

The Post's report was published the day after The New York Times reported that House lawmakers were told by U.S. officials last week that Russia was also attempting to interfere in the 2020 elections to help the campaign of President Trump.

"It was not clear what role they were going to play. We were told that Russia, maybe other countries, are gonna get involved in this campaign," Sanders said.

"The ugly thing that they are doing, and I've seen some of their tweets and stuff, is they try to divide us up. That's what they did in 2016," he added.

Sanders described Russian President Vladimir Putin as a “thug” in a statement on Friday, emphasizing that he stands “firmly against” Russian interference efforts.

“Unlike Donald Trump, I do not consider Vladimir Putin a good friend. He is an autocratic thug who is attempting to destroy democracy and crush dissent in Russia," Sanders said. "Let’s be clear, the Russians want to undermine American democracy by dividing us up and, unlike the current president, I stand firmly against their efforts, and any other foreign power that wants to interfere in our election."

According to U.S. intelligence agencies, the Senate Intelligence Committee and the report compiled by former special counsel Robert Mueller, Russian agents successfully launched a sweeping interference campaign in the lead-up to the 2016 elections designed to favor Trump's campaign that year.

These interference efforts included disinformation campaigns across social media platforms and targeting state election systems, with Russian agents successfully hacking into the voter registration database in Illinois and systems in two Florida counties. There is no evidence that any votes were changed.

Sanders addressed the previous Russian election interference in his statement on Friday, saying that “in 2016, Russia used internet propaganda to sow division in our country, and my understanding is that they are doing it again in 2020.”

Sanders also described his campaign as the “strongest” in terms of having the chance to beat Trump in the election, pointing to “grassroots” funding efforts.

“I don't care, frankly, who Putin wants to be president,” Sanders said in his statement. “My message to Putin is clear: stay out of American elections, and as president I will make sure that you do.”

Sanders noted his concerns around Russian disinformation efforts during the Democratic debate earlier this week.

“All of us remember 2016, and what we remember is efforts by Russians and others to try to interfere in our election and divide us up,” Sanders said during the debate. “I’m not saying that’s happening, but it would not shock me.”

Russian election interference efforts have been in the spotlight this week after reports on Thursday revealed that former acting Director of National Intelligence Joseph Maguire stepped down from his position due to Trump’s displeasure that intelligence officials briefed the House Intelligence Committee about Russian efforts to interfere in the 2020 elections.

According to The New York Times, Trump was particularly displeased with committee Chairman Adam Schiff (D-Calif.), one of the leaders of the impeachment inquiry into the president's dealings in Ukraine, being present during the briefing and worried that Democrats would use the information about Russian interference against him.

Trump on Friday pushed back against these reports, tweeting that they were part of a “misinformation campaign” against him.

Both the House and Senate are due to receive briefings on election security efforts ahead of 2020 on March 10. A Senate aide said that the Senate briefing was planned prior to the reports of Russian interference.

The new revelations about interference come after FBI Director Christopher Wray testified to the House Judiciary Committee earlier this month that foreign influence efforts by Russia “never stopped” after the 2016 elections.

Wray signed on to an op-ed earlier this week asking that the Americans be vigilant of election interference efforts.

In the op-ed, Wray — along side Maguire, acting Homeland Security Secretary Chad Wolf, Attorney General William Barr, and several other top officials — asserted that “we have yet to identify any activity designed to prevent voting or change votes.”