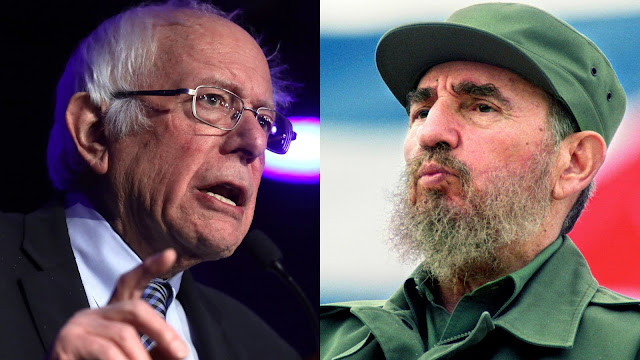 Democratic presidential candidates went after front-runner Sen. Bernie Sanders (I-Vt.) on Monday for comments he made about the late Cuban leader Fidel Castro in a “60 Minutes” interview.

Sanders, speaking in an interview that aired Sunday evening, said it’s “unfair to simply say everything is bad” about Castro's Cuba. He highlighted the authoritarian leader's “massive literacy program” as one of the bright spots.

Biden adviser Cristóbal Alex said Sanders's remarks are “deeply offensive” to people across the country that have fled political persecution.

“Bernie’s comments indicate he either fails to understand the pain and suffering that Fidel Castro, Nicolas Maduro, and Daniel Ortega have caused to so many people, including Americans now living here, or worse, that his ideology blinds him to the realities of life in these countries,” Alex said.

“After four years of looking on in horror as Trump cozied up to dictators, we need a president who will be extremely clear in standing against regimes that violate human rights abroad. We can't risk nominating someone who doesn't recognize this,” Buttigieg tweeted in Spanish.

“Fidel Castro left a dark legacy of forced labor camps, religious repression, widespread poverty, firing squads, and the murder of thousands of his own people,” Bloomberg tweeted. “But sure, Bernie, let’s talk about his literacy program.”

During the "60 Minutes" interview, Sanders condemned Castro’s imprisonment of dissidents. He also distanced himself from Trump’s relationship with foreign leaders, saying, “I do not think that Kim Jong Un is a good friend. I don't trade love letters with a murdering dictator. Vladimir Putin, not a great friend of mine.”

Obama, speaking in 2016 at a joint press conference in Havana with then-Cuban President Raul Castro, said, “The United States recognizes progress that Cuba has made as a nation, its enormous achievements in education and in health care." Obama does not appear to reference Fidel Castro.

Sanders is likely be pressed on the matter at Tuesday night’s debate in South Carolina, when several of his Democratic rivals will be onstage with him.

But Democratic criticism has not been limited to fellow White House hopefuls.

"Florida Democrats condemn dictators who toppled democracies across the globe and stand in solidarity with the thousands of people who have fled violent dictatorships in Cuba, Venezuela, and Nicaragua,” party chairwoman Terrie Rizzo said.

“Candidates need to understand our immigrant communities’ shared stories, as well as provide solutions to issues that matter to all Floridians including access to affordable health care and rejecting a Trump economy that works only for the very rich."

Rep. Donna Shalala (D-Fla.) said she hopes that in the future Sanders will speak to some of her constituents “before he decides to sing the praises of a murderous tyrant like Fidel Castro.”