Roger Stone sentenced to over three years in prison 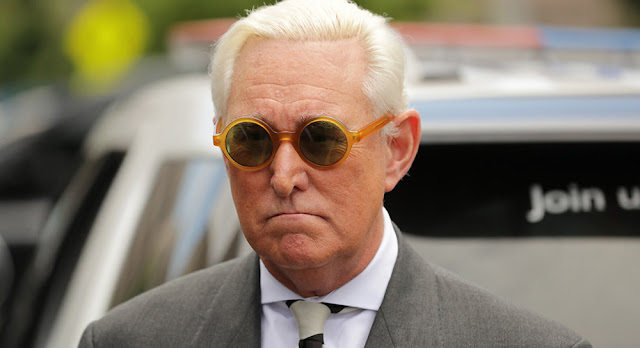 A federal judge on Thursday sentenced Roger Stone to three years and four months in prison for lying to Congress and witness tampering, and criticized President Trump for trying to influence the outcome of the case over his longtime adviser.

Thursday's sentencing hearing follows a tumultuous stretch that saw Trump attack the original prosecutors, the judge and the jury in the case on behalf of his onetime adviser. And it follows the withdrawal of the original prosecution team from the case after the Justice Department amended their recommendation that Stone serve seven to nine years in prison.

Judge Amy Berman Jackson delivered an implicit rebuke to Trump over his comments about the case and admonished the administration for its reversal over the past week.

"The court cannot be influenced by those comments," she went on. "They were entirely inappropriate. But i will not hold them against the defendant, either."

During the hearing, Jackson sharply questioned the new attorney for the prosecution, John Crabb Jr. of the D.C. U.S. Attorney's Office, over the administration's sentencing reversal.

Crabb demurred when Jackson asked whether he actually wrote the updated sentencing memo that the government submitted under his name last week or if his superiors at the Justice Department had directed him to ask for a sentence "far less" than the original recommendation. He said that he was not authorized to discuss internal department deliberations in open court.

Still, Crabb was conciliatory in his courtroom remarks, praising the original prosecution team and insisting that the Justice Department is committed to doing its job without "fear or favor." Despite amending the original sentencing recommendation, he argued that Stone still deserves a "substantial" prison sentence.

That controversy has overshadowed the case, in which prosecutors accused Stone of lying to Congress about his contacts with associates he believed to have been communicating with WikiLeaks during the 2016 presidential campaign in an effort to feed inside information to then-candidate Trump. He was also charged with pressuring a witness into not cooperating with congressional investigators.

Prosecutors alleged during trial that Stone lied in 2017 to the House Intelligence Committee, which was investigating Russian interference in the election, in an effort to protect the president, who was still in the early months of his administration.

Zelinsky and the rest of the original prosecution team withdrew from the case last week after Attorney General William Barr overruled their sentencing recommendation. One of the attorneys on the team resigned from the Justice Department.

The sentence is sure to increase speculation that Trump will pardon Stone. The president said publicly this week that he hasn't given it any thought, but a round of high-profile pardons and commutations this week was seen by many as a message intended for Stone and other Trump associates facing prison time.

Stone's lawyers asked Jackson, an Obama appointee on the U.S. District Court for the District of Columbia, for a new trial in a sealed motion submitted last week. Jackson said that Stone's sentence will be delayed from going into effect until after the motion is settled.