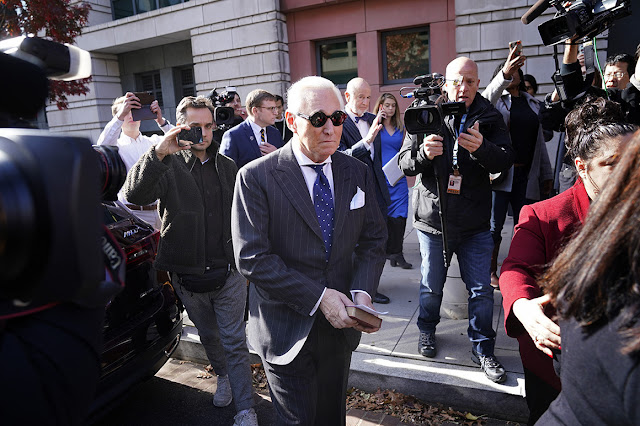 Attorneys for Roger Stone on Friday requested a new trial, a day after saying they were looking into potential bias by a juror who voted to convict the longtime Trump associate of lying to Congress and witness tampering.

The request also comes after President Trump accused the juror of harboring “significant bias” following reports that her social media activity contained posts that were critical of Trump.

“Now it looks like the fore person in the jury, in the Roger Stone case, had significant bias. Add that to everything else, and this is not looking good for the “Justice” Department. @foxandfriends @FoxNews," Trump tweeted Thursday.

Stone’s attorneys would not reveal the contents of the motion, which was filed under seal to protect sensitive information, saying only that an un-redacted version will be submitted later for public filing.

However, a day earlier they indicated they were looking into the newly surfaced social media activity of jury foreperson Tomeka Hart.

“Mr. Stone and his defense team are diligently reviewing the newly reported information to determine any appropriate next steps,” said attorney Grant Smith, who did not refer to the juror by name.

Hart’s role as the jury foreperson became publicly known Wednesday when she confirmed to CNN that she had written a Facebook post defending the prosecutors in Stone’s case.

The four-person prosecution team quit Tuesday after their recommended sentence of seven to nine years in prison was overruled by top Justice Department officials, sparking questions about whether the White House had put undue political pressure on the department to seek a lighter sentence for Trump’s longtime associate.

Stone, a 67-year-old right-wing provocateur, was found guilty in November of lying to Congress and witness tampering related to his efforts to provide the Trump campaign inside information about WikiLeaks in 2016.

Prosecutors recommended in a Monday filing that Stone serve between seven and nine years in prison in accordance with federal guidelines — which was reversed less than 24 hours later when the department asked the judge to impose a far lighter sentence.

"I want to stand up for Aaron Zelinsky, Adam Jed, Michael Marando, and Jonathan Kravis — the prosecutors on the Roger Stone trial," Hart wrote in the post that was shared with CNN.

"It pains me to see the DOJ now interfere with the hard work of the prosecutors. They acted with the utmost intelligence, integrity, and respect for our system of justice."

Several of Hart's anti-Trump tweets were then uncovered, including a March post about the Mueller investigation, which led to the charges against Stone.

In January 2019, Hart also sent a since-deleted tweet of Stone's arrest in a pre-dawn raid in Florida while sharing an article outlining his indictment. "Brought to you by the lock her up peanut gallery," Hart wrote.

Hart did not respond to a request for comment.

U.S. District Judge Amy Berman Jackson, who is presiding over Stone’s case, ordered the DOJ to respond to the motion by Tuesday.

It was unclear if the request for a new trial — Stone’s second attempt after the first was denied — would delay his scheduled Feb. 20 sentencing.