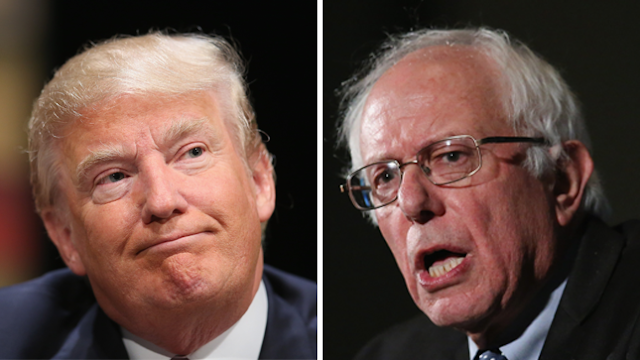 Republicans are looking to raise money and energize their base, believing they will have a path to reclaim a majority in the House if Democrats nominate Sen. Bernie Sanders (I-Vt.), a self-described democratic socialist.

The GOP has an uphill climb to taking back the House, which would require flipping 18 Democratic-held seats. Republican House candidates have struggled to raise money this cycle and Trump’s deep unpopularity in suburban districts is an urgent concern for candidates up and down the ballot.

But GOP lawmakers and operatives charged with electing Republicans to the House view Sanders’s success so far in the Democratic primary as a gift in swing districts, where Democrats won the House in 2018 by running moderate candidates in places where Trump’s style has been a huge turnoff to independents and women.

Republicans say they’ll tie the socialist moniker around those moderates, forcing Democratic incumbents to choose between backing Sanders and his left-wing agenda, or risk alienating the liberal base by moving away from him.

“Given the positions that House Democrats have taken, it’s fitting that Bernie Sanders will be their likely nominee. There’s no hiding it now: The Democrat Party is the party of socialism. Those views are wildly out of touch with mainstream America, and Democrats will pay a price for aligning themselves with him,” said House Minority Whip Steve Scalise (R-La.).

The GOP is making the case — and seeking to raise money — off the idea that Sanders’s left-wing policies will be a surefire loser for Democratic incumbents running in districts in Oklahoma, South Carolina and upstate New York.

Rep. Mark Walker (R-N.C.), the vice chairman of the House Republican Conference, said a Sanders nomination would be a game-changer for the GOP, ensuring the lower chamber is in play should the 2020 contender come away from Super Tuesday with an insurmountable lead in delegates.

“As far as Bernie, almost wanting to keep how we feel about this on the down-low because this may be the perfect scenario for Republicans to take back the House and also the down-ballot impact throughout the country,” Walker said. “If Bernie can hang on and deliver next Tuesday, this literally changes the landscape from U.S. Senate races down to your local school board.”

There are reasons to be skeptical of claims that Sanders will be costly for House Democrats.

Sanders leads Trump in most national polls and operatives on both sides said they have no idea how a Trump-Sanders election would play out.

“I think it could go either way depending on the district, to be honest with you,” said Rep. Rodney Davis (R-Ill.). “You’ve got districts that I think Bernie can be helpful to the Democrats and some districts it’s going to hurt them. But I just hesitate like many of my colleagues to get giddy about Bernie Sanders.”

The House GOP campaign arm, which has been sounding the alarm about candidate fundraising woes, has spent the past 24 hours blasting out campaign emails targeting vulnerable Democrats and asking if they support Sanders and his “socialist base.”

“The Democrats’ embrace of socialism is going to cost them their majority in the House and they know that,” Emmer said.

GOP lawmakers are expressing confidence that Democrats in swing seats will face a significant hurdle in attempting to distance themselves from Sanders’s left-wing ideology if he secures the nomination — potentially providing them with a significant edge in the districts that cost Republicans the majority during the midterms.

“How do they [moderates] distance themselves?” said Rep. Bradley Byrne (R-Ala.). “I think it puts the House back in our hands and ensures we keep the Senate. ... Socialism is just so unpopular — it will turn off the swing voters we lost in 2018.”

Still, national polls show Sanders running as well as anyone against Trump, and Democrats believe moderates and independents will get fully behind whoever wins the nomination under the shared goal of defeating Trump.

A Roanoke College poll of Virginia found Sanders leading Trump by 9 points, the largest margin in the Democratic field. And a Texas Lyceum poll found Sanders doing best against Trump in the Lone Star State, where he only trails the president by 3 points.

At a town hall event on CNN on Monday night, Sanders made the case that his campaign has the most energy behind it, as evidenced by the thousands of people who show up to his rallies.

He argued that the policies he’s pushing — a $15 minimum wage, universal health care and addressing climate change — generally have broad support and are firmly within the mainstream.

And Sanders said that his message about economic anxiety and his ability to attract working-class voters who broke for Trump in 2016 will be a winner for Democrats up and down the ballot.

“We are the … strongest campaign because we have the energy and the excitement that we need to create the largest voter turnout in the history of this country, which is exactly what we need in order to defeat Trump,” Sanders said.

But the GOP’s money push around Sanders underscores fears some Democrats have about his nomination and how it will play in swing districts.

Jonathan Kott, a former top aide to Sen. Joe Manchin (D-W.Va.), is running a group called the Big Tent Project, which has been running ads in South Carolina and Nevada warning that Sanders’s policies are too extreme.

“It’s going to be hard for Democratic candidates who won in red districts and red states to win with a socialist at the top of the ticket,” Kott said. “It was the moderate candidates that won us the majority. Every day, reporters will be asking these candidates what they think about his policies and that’s a problem for them.”

But Davis, the Illinois Republican whose district went for President Obama in 2008, warned that forecasters predicted Trump would cost Republicans the House in 2016. Democrats only picked up six seats that cycle and remained in the minority until 2018.

“Democrats were giddy about [Trump] being the candidate and it didn’t work out for them because they underestimated the type of energy that he can bring to the presidential race,” Davis said.