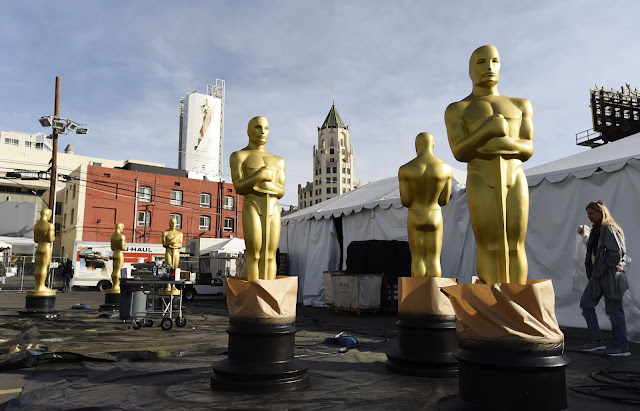 Many people watching last night’s Oscar ceremony asked the question: Who on earth is this supposed to be for?

Janelle Monaé and Billy Porter performed the opening number? These are not movie stars. The number was like an Identity Politics Rob Lowe & Snow White.

The Oscar mandarins have been doing a lot of thinking about how to arrest the long-term slide in viewership. Last year ratings ticked up a bit after the disastrous 2018 ceremony in which the silly progressive parable The Shape of Water, aka Woke Splash, won everything in sight. But last year there were a couple of huge movies — A Star Is Born and Bohemian Rhapsody — that people not only loved but also led themselves to musical numbers that did not disappoint. Queen, one of the most popular recording acts of all time, opened the show. People really wanted to see Lady Gaga and Bradley Cooper sing, and they got a wow moment out of their duet.

Looking at the ratings over time, it’s clear that what draws viewers is the prospect of seeing a film they loved win big. This year, two very strong contenders were moderate-to-big hits: Once Upon a Time . . . in Hollywood and 1917. Also Brad Pitt was sure to win and don’t people love Brad Pitt? He’s earned it and he’s cool. Pitt has been giving hilarious self-deprecating speeches about his dating life all awards season. Last night, by contrast, he did a sour impeachment joke about John Bolton. Pitt was the first honoree of the evening, and he set the tone for the most grindingly politically correct Oscars ever telecast. People absolutely loathe political correctness. It’s the surest way to alienate your audience.

Ratings, naturally, fell below even the previous low mark, averaging a pathetic 23.6 million viewers and hitting a rating of 5.3 in the 18-49 demographic that determines ad rates. These are absolutely terrible numbers. There must have been a lot of people tuning in, deciding they didn’t like what they saw, and tuning out. The numbers were down 11 percent in viewership and 22 percent in “the demo” from the previous low. Thud.

Who can blame viewers for running away when the ceremony was so breathlessly, insistently, hysterically PC? Who even heard of half of these presenters brought in to show us the Oscars are diverse? People want stars. What we got instead was a harangue, sometimes in the form of song, sometimes in rap, sometimes in terrible jokes, about the number of black actors nominated for acting honors (one) and the number of female directors nominated (none). Interspersed were assorted ill-advised cheap shots by everyone from Pitt to Joaquin Phoenix, who told us we should feel bad about milking cows. Oh, and a Korean film seen by almost nobody won the top two awards.

Over the last few years, mentions of Donald Trump seem to have been dying out at awards shows as producers hinted that antagonizing the president wasn’t good for anybody’s psyche or ratings. Last night the evening wasn’t about Trump, but it felt like a three-and-a-half hour unconscious-bias training seminar. These people are supposed to be the best and most glamorous entertainers on earth. Viewers were instead treated to something so didactic and glum it could have been held in a conference room at the Ramada Inn off the turnpike.