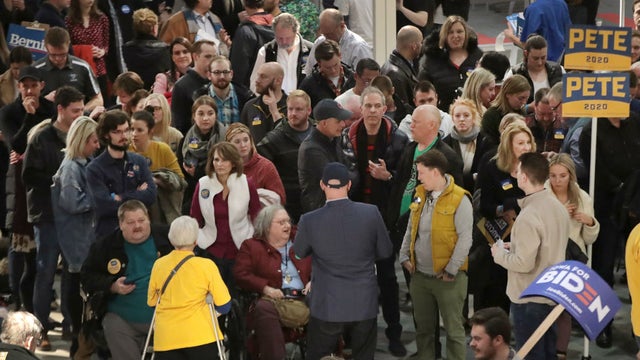 The Iowa Democratic Party will release results from its first-in-the-nation caucus at some point on Tuesday after technical snafus and reporting concerns led to major delays in voting.

Troy Price, the chairman of the state Democratic Party, said on a brief call with reporters late in the night that the errors that led to the long delay were a result of reporting problems, as precinct chairmen around the state said they had waited on hold for hours to get through to a hotline that was supposed to be in place as an emergency backup.

"The integrity of our process and the results have and always be our top priority. At this point, the [Iowa Democratic Party] is manually verifying all precinct results. We expect to have numbers to report later today. We want to emphasize this is a reporting issue, not a hack or an intrusion, and it's exactly why we have a paper trail and systems in place to uphold the integrity of our process,” Price said.

"They're validating every piece of data we have against our paper trail. The system is taking longer than expected, but it's in place to ensure we are eventually able to report results with full confidence. We have said all along we have the backups in place for exactly this reason. We are updating campaigns and we will continue to provide updates as they are available,” he said.

Price’s entire statement lasted just over a minute. He did not take questions from reporters.

The call came after frustrations mounted earlier in the night among campaign operatives who said they could not get answers to questions from the state party about the delay of results hours after caucuses convened at 1,700 locations across the state.

An earlier conference call between top campaign officials and the state party ended abruptly, two sources on the call said, without any real answers.

“The [Iowa Democratic Party] hung up on campaigns when they pressed for a release time,” said one senior strategist for a leading candidate. “We won’t know anything until some time tomorrow. All campaigns are pissed.”

“They basically told us nothing,” said a senior strategist for another leading contender.

The delays appeared to come after vote totals submitted through an app showed some inconsistencies. Throughout the night, state Democratic Party officials repeatedly said they were working through “quality controls” to verify the results.

But by 11 p.m. Central Standard Time, only 35 percent of precincts had reported — and none of the totals had been verified, the sources said.

The Iowa caucuses have traditionally given the winning candidate a critical boost heading into other early-voting states and winnowed the field by culling candidates who underperformed.

But the errors and delays robbed the candidate who will eventually be declared the winner of an opportunity to bask in the warm glow of victory, and reap the financial rewards that a flood of fundraising dollars could have brought to a cash-strapped campaign. And the candidates who might have exited the race after a poor result will instead soldier on to New Hampshire, where the first-in-the-nation primary has never been plagued by such delays.

When it became clear the results would not come until early Tuesday morning at the earliest, the Democratic candidates paraded on stage at their respective post-caucus parties, reciting versions of their stump speech instead of more jubilant victory speeches.

Former Vice President Joe Biden’s campaign raised the prospect of further delays, writing in a letter to state party officials that it was concerned about “considerable flaws” in the voting process.

“The app that was intended to relay Caucus results to the Party failed; the Party’s back-up telephonic reporting system likewise has failed. Now, we understand that Caucus Chairs are attempting to — and, in many cases, failing to — report results telephonically to the Party. These acute failures are occurring statewide,” wrote Dana Remus, the Biden campaign’s general counsel.

Remus demanded “full explanations and relevant information regarding the methods of quality control you are employing, and an opportunity to respond, before any official results are released.”

There were other signs of problems throughout the night. Amid massive turnout that exceeded even party officials’ most optimistic forecasts, some precincts ran out of voter registration forms.

“We printed tens of thousands of extra voter registration forms and some precincts are still running out. We’re making copies and deliveries to get them covered, but this Caucus is gonna be the big one,” Sean Bagniewski, the chairman of the Polk County Democratic Party in Des Moines, wrote on Twitter.