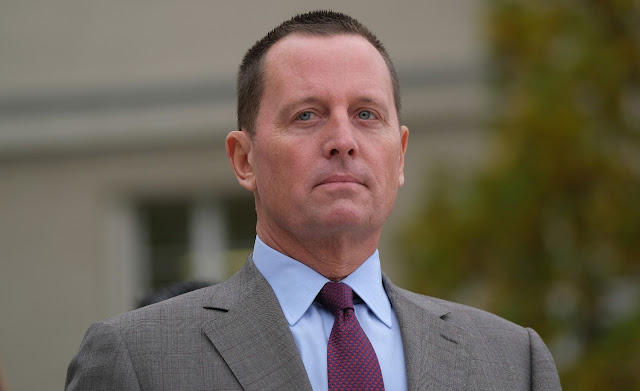 President Trump’s temporary appointment of Richard Grenell as acting Director of National Intelligence (DNI), a move that appears to be primarily a house-cleaning exercise, creates new problems for Senate Republicans.

Sen. Susan Collins (R-Maine), a co-author of the legislation creating the DNI position after the 9/11 attacks, said Monday that Grenell does not have the experience needed for the job.

“As one of the four authors of the law that created the DNI back in 2004, I care deeply about that position and believe the person needs experience in the intelligence community, which regrettably Ambassador Grenell does not have,” said Collins, a senior member of the Senate Intelligence Committee who is up for reelection this year.

Collins said she wished Trump had gone with Joseph Maguire, who until Friday had served as acting DNI.

“I would have much preferred that the president nominate the acting director, Maguire, for the post,” she said.

Senate Intelligence Committee Chairman Richard Burr (R-N.C.) released a statement Friday praising the work of Maguire and his deputy Andrew Hallman, but did not mention Grenell.

Other Republicans said it is important that Trump find someone to fill the position on a permanent basis, and it’s widely assumed that candidate will not be Grenell, who would face an uphill battle to securing confirmation in the Senate.

GOP senators on Monday said they believe Trump is reviewing various candidates to nominate for the permanent post.

“Now, apparently the president’s got some other people he’s considering nominating for the permanent position. I think it’s better for us to have a permanent DNI,” said Sen. John Cornyn (R-Texas), a member of the Senate Intelligence Committee.

Cornyn said it would be good for Trump to put forth a candidate to fill the DNI’s role on a long-term basis “sooner rather than later.”

“We don’t need to mess with that area of the federal government’s role. We need a little stability and predictability, and obviously with an interim appointment you can’t really plan,” he added.

Cornyn, like Collins and Burr, voiced support for Maguire.

“I thought he did a very good job,” Cornyn said.

Sen. Joni Ernst (R-Iowa), a member of the Armed Services Committee, when asked if Grenell was qualified for the post, said, “He’s acting DNI right now and we’ll see where we go from here.”

“What I understand is he’s working with the administration to find a permanent director,” she said. “Obviously everybody would love to see a permanent solution.”

Asked if he was comfortable with Grenell’s qualifications, Senate Republican Whip John Thune (S.D.) acknowledged there’s little senators can do about his temporary appointment.

“I don’t know that we have much choice,” Thune said.

He said the Senate would have a chance to weigh in when Trump nominates someone to serve for a longer term, something lawmakers expect relatively soon.

“The president can put people into an acting role as long as the law allows but at some point they’ll have to make a permanent nomination, so we’ll see what they do,” Thune said.

Maguire is a former Navy SEAL and a retired three-star admiral who once led the Naval Special Warfare Command, a role that put him in charge of targeting and eliminating national security threats.

Trump reportedly became irate with Maguire after he allowed lawmakers to be briefed on the intelligence community’s belief that Russia is attempting to interfere in the 2020 election to help Trump win a second term.

Of concern to some lawmakers is Grenell’s decision to hire Kashyap Patel, a former key aide to Rep. Devin Nunes (R-Calif.), with a mandate to purge officials viewed as disloyal to Trump, according to news reports.

“He has no experience in the intelligence community and is simply known as an acolyte to President Trump,” Schumer declared on the Senate floor, asserting the move “brings our nation closer and closer to a banana republic.”

Maguire, who resigned Friday along with Hallman, became acting director after the resignation of former DNI Dan Coats. Maguire’s term was due to expire March 11.

Grenell will also be required to step down on that date unless Trump formally nominates someone to serve as permanent DNI. That would then allow Grenell to serve for at least six months longer.

The personnel moves have sparked criticism that Trump is placing loyalty ahead of experience in structuring the senior ranks of the intelligence community.

Trump’s appointment of Grenell, who recently served as U.S. ambassador to Germany, appears to be a response to the bruising impeachment battle that consumed Capitol Hill during the fall and the first several weeks of 2020.

Maguire played a key role in the impeachment battle by allowing an anonymous whistleblower complaint against Trump to be shared with Congress. House Democrats used the complaint to launch a formal inquiry that resulted in the passage of two articles of impeachment.

Grenell has also sparked concern as a possible impediment to the exchange of information between intelligence community officials and lawmakers. He is looking into the intelligence shared at a classified briefing earlier this month in which lawmakers were told that Russia is interfering in the 2020 election and that Russian agents are trying to help Trump win reelection.

Grenell is viewed as a staunch Trump loyalist who sparked controversy while serving as ambassador by criticizing Germany’s immigration and refugee policies and declaring that he wanted to “empower” conservatives throughout Europe.

More recently, he pushed back against Attorney General William Barr’s complaint that Trump’s constant tweets were making it difficult for him to run the Justice Department. While many Senate Republicans said they supported Barr’s actions, Grenell praised Trump’s Twitter habit as making his own job “so much easier.”

Grenell will have to handle the delicate job of keeping lawmakers updated on Trump’s response to national security threats, which became a point of tension last month after the president ordered a drone strike that killed Gen. Qassem Soleimani, the leader of Iran’s Revolutionary Guard’s elite Quds Force.

Republican Sens. Mike Lee (Utah) and Rand Paul (Ky.) last month slammed an administration briefing on the strike and the plan for responding to Iranian retaliation as “insulting” and “less than satisfying.”