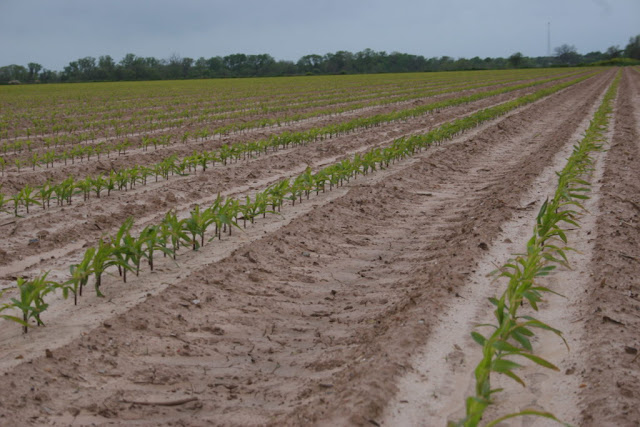 Texas corn producers face a 2020 that could provide price opportunity ahead of what is shaping up to be a record national corn crop, said a Texas A&M AgriLife Extension Service expert.

The preliminary U.S. Department of Agriculture feed grain outlook for 2020 suggests an increase in corn acres and a record yield. That would produce a record corn crop, and combined with carryover from 2019, result in an all-time record high total corn supply.

Corn crop expectations are up

Mark Welch, Ph.D., AgriLife Extension grain economist, College Station, said the outlook coupled with other market factors could mean lower prices in the long term if the U.S. crop comes in as expected.

“It looks like they’re expecting a bounce back on corn acres this year and are estimating a record crop,” Welch said. “They’re talking about incredible production numbers.”

Last year, nasty spring conditions in the Corn Belt prevented farmers from planting 10 million to 14 million acres. But corn acres held about steady with the last several years, with about 90 million acres still planted nationally in 2019.

The USDA report estimates 94 million acres of corn will be planted nationally in 2020.

“That’s a significant increase,” Welch said. “They are just beginning the farmer survey and are basing their preliminary numbers on math models. The prospective plantings will become clearer in March when they survey producers.”

The report also estimates per-acreage production to increase to 178.5 bushels compared to the production peak in 2017/2018, when acre-production averaged 176.6 bushels.

“It will take a good season to do it, but that is an amazing number that would push total production beyond 15 billion bushels, which is a huge number,” he said. “You’re looking at 1.8 billion more bushels than the current estimate of the 2019 crop if conditions play out favorably.”

What’s that mean for Texans?

Texas has an advantage when it comes to production and grain marketing – an early crop, Welch said. Producers in South, Southeast, the Coastal Bend and Central Texas will have much of their harvest ready to market before the production picture for the Corn Belt is clearer in August.

The estimates for 94 million acres, 178.5 bushels per acre and the expected carryover does not bode well for strong corn prices in 2020, Welch said. But getting to market before speculators have a clearer picture of a potential corn crop could help.

“There will still be a lot of things unknown about the Corn Belt crop, and that’s a market advantage for some Texas growers,” he said. “What happens there over the next few months weather-wise and with updated prospective planting reports will weigh on where prices go.”

There are still many aspects of the 2019 crop that is unknown, Welch said. Some acres went unharvested and 2019 quality and quantity reports have not fully determined the carryover crop’s value in various markets.

Global trade of many products and commodities to China were anticipated to improve with the signing of the Phase 1 trade agreement, but that could change due to animal and human diseases there disrupting the market, Welch said.

With futures prices for corn trading at about $3.80 per bushel and cotton around 68 cents per pound, neither paints a clear path for Texas growers weighing their options, he said.

“It’s too close to call,” he said. “So, I think you’ll see producers deciding based on what they grow best or based on an agronomic-rotation schedule for their operation. It will be a challenge for many producers to budget for black ink at these prices, so they will probably base their decision on other factors.”

CENTRAL
Much of the district reported between 1.5-2.5 inches of rainfall. The rain helped soil moisture prior to planting. However, it will likely prevent early corn planting. Stock tanks were full, and water was standing in some pastures and fields. Farmers will plant corn as soon as the soil dries enough. Temperature highs reached 83 degrees with lows below freezing. Early variety peaches began blooming. Livestock were in fair condition, and supplemental feeding continued. Overall rangeland and pasture conditions were poor to fair. Crop conditions were good in nearly all counties.

COASTAL BEND
Scattered rain fell throughout the district, but most areas still needed additional moisture. Many areas reported that cold, damp weather slowed fieldwork. Some corn was planted and had emerged. Sorghum was planted in southern parts of the district. Preplant fertilizer applications continued, along with preplant burndown herbicide applications. Pastures were green and growing, but supplemental feeding of hay and protein continued as winter pastures needed a heavy, soaking rain. Spring wildflowers began to bloom in some areas. Cattle remained in good condition with good pricing at markets.

EAST
The district received excessive amounts of rainfall. Subsoil and topsoil conditions were reported as surplus. Producers struggled to fertilize winter cover crops due to wet fields. Trinity County reported tractors and trucks became bogged down when producers tried to cross fields. Pasture and rangeland conditions were fair. Winter pastures were not growing well this year. Drier conditions will be needed for the planting of corn, watermelons and grain sorghum to begin. Livestock were fair to good. Cattle markets continued to improve. Wild pigs were active and caused damage in pastures and fields.

NORTH
Topsoil moisture levels were adequate to surplus. Some counties recorded 1.25-2.5 inches of rain. Soil was saturated. Wheat fields showed signs of stress due to standing water in most pastures. Feral hog activity was high.

FAR WEST
Temperature highs were in the low 80s with lows in the lower 30s. A few scattered showers delivered up to 0.75 inches of rain. Fieldwork slowed due to wet fields. Wheat made tremendous progress with recent rains. Most early wheat looked very good for this time of year. The later-planted crop was starting to grow. No insect or disease issues were reported. Overall, rangeland conditions were good and improving. Livestock were in good condition. Cattle producers were rotating pastures. Lambing and kidding were going strong.

SOUTHEAST
Heavy to slow, soaking rains fell in most parts of the district. Standing water remained in some areas. Cool-season pastures were performing well. Rangeland and pasture ratings varied from excellent to very poor with good being most common. Soil moisture levels ranged from adequate to surplus with adequate being most common.

SOUTHWEST
A cold front and traces of precipitation were reported across the district. Cool-season vegetation was emerging amid fair soil conditions. Corn planting began, and wheat was being irrigated. Spring lamb and kidding was underway. Producers continued to supplement feed for both livestock and wildlife.

SOUTH
Weather conditions were mild with short to very short soil moisture levels. McMullen County reported that two days of misty rain helped topsoil. Maverick County reported up to 0.7 of an inch of rain over the last two reporting periods, but drought conditions persisted. Hay was in short supply with many producers running out. Wheat and oat field were in good condition. Potato fields were emerging. Pasture and rangeland conditions were in poor condition. Livestock supplemental feeding continued. Ranchers were reporting water tanks were low or dry. Some producers were hauling water and culling herds, while other producers were preparing soil for planting. There were some concerns about irrigated crops. Coastal Bermuda grass fields were not producing hay bales. Onions made good progress under irrigation. Spinach and cabbage harvests were active. Farmers were slowly beginning to plant corn and some grains before it’s too late. A few producers planted cotton.