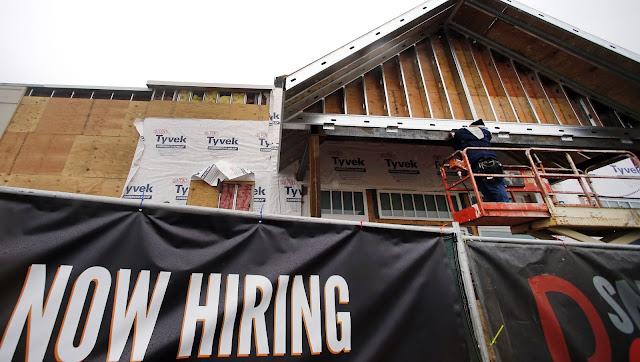 The U.S. added 225,000 jobs in January as a decline in trade tensions and mild winter weather boosted a resilient labor market, according to data released Friday by the Bureau of Labor Statistics.

The January jobs gain was far beyond the projections of economists, who expected the U.S. to add between 150,000 and 160,000 workers. The unemployment rate ticked higher, to 3.6 percent, as the labor force participation rate rose by 0.2 percent, to 63.4.

Economists forecasted a solid month of job gains after President Trump signed a preliminary trade deal with China and a revised North American trade agreement, easing years of uncertainty and tension that roiled the global economy. A warm January also helped the construction sector add 44,000 workers, leading all industries for the month.

The blowout jobs report reinforced the strength and resilience of the U.S. economy amid a global slowdown, the toll of Trump's tariffs and daunting foreign conflicts. The surprising gain also gives Trump another example to tout on the campaign trail as he seeks to clinch a second presidential term with a strong economy.

Economic growth as measured by gross domestic product (GDP) expansion slowed to 2.3 percent in 2019 and is expected to slump to roughly 2 percent in 2020. While that pace is well below Trump's promised clip of at least 3 percent growth, economists expect it to sustain a growing labor market and unemployment near record lows.

Treasury Secretary Steven Mnuchin ceded in a Thursday interview that the U.S. would not reach 3 percent growth in 2020, but "we're seeing the numbers that we really want, which is very strong job growth, and also wage growth."

Even so, the report also included revisions to 2019's figures that shaved roughly 514,000 off of last year's total jobs gain. The economy also came close to breaking a record stretch of job gains in February only adding 1,000 jobs, according to revised figures.

And employment in manufacturing and mining continued to stagnate despite Trump's promises to revive those industries. The manufacturing sector lost 12,000 jobs in January, almost entirely in the auto sector, while mining employment stayed largely the same.

Wage growth also ticked higher to 3.1 percent on an annualized basis, increasing from December but below the pace economists consider necessary to keep up with rising health care, education and housing costs.