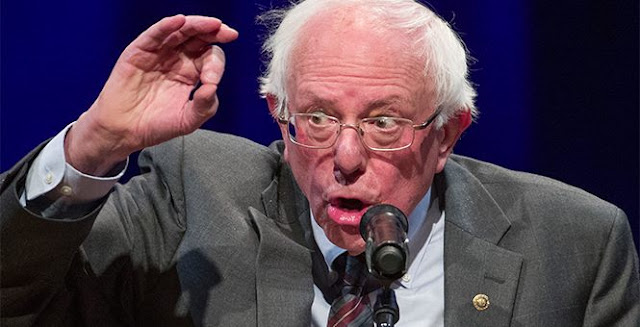 From his opening announcement speech, Sanders made it clear that the growing number of millionaires in the United States was “something profoundly wrong” as long as poverty persisted: “There is something profoundly wrong when, in recent years, we have seen a proliferation of millionaires and billionaires at the same time as millions of Americans work longer hours for lower wages and we have the highest rate of childhood poverty of any major country on earth.”

Sanders didn’t single out one group of multimillionaires, such as hedge fund managers, or corporate chief executives, or Hollywood stars or professional athletes. If Sanders ever acknowledged that some millionaires and billionaires were good people, who supported many great charities, I missed it. (In 1981, the newly-elected Mayor Sanders told the local United Way fundraiser that “I don’t believe in charities.”) The Sanders narrative of American life was simple and clear: The villains of our national story were “millionaires and billionaires and big banks.”

It turns out that becoming a national political figure builds a huge potential audience for book sales, and driven primarily from sales of books, Sanders and his wife earned $1.06 million in 2016 and $1.13 million in 2017. Sales cooled by 2018, and the couple earned “only” $561,000 that year.

Many noticed that once Sanders started running again in the 2020 cycle, he dropped the millionaires from his mantra and started lambasting only the “billionaires and the big banks.” Sanders appeared to realize that he looked somewhat ridiculous denouncing millionaires while being one.

In Bernie Sanders’ mind, he earned that money: “I wrote a best-selling book. If you write a best-selling book, you can be a millionaire, too.” (Credit where it’s due: Sanders did not use a ghostwriter, as many busy elected officials do.) As far as Sanders is concerned, he deserved every last penny of those revenues from book sales. No one, in his mind, was exploited, shortchanged, or treated unfairly in those transactions — not his editor, or the printers, or the promoters, or anyone else employed by the publisher. Everyone was treated fairly, and Sanders received a hefty fortune that he deserved.

But during the debate, Sanders argued that Mike Bloomberg did not earn his fortune: “You know what, Mr. Bloomberg, it wasn’t you who made all that money. Maybe your workers played some role in that, as well.” Many, many people worked for Bloomberg over the years, under freely-negotiated contracts, and were free to leave to work for other employers. If Bloomberg’s workers felt they were underpaid, they could seek better deals elsewhere. But in Sanders’s mind, Bloomberg’s fortune is at least partially undeserved; somewhere along the line, he must have exploited some employee.

Regarding his houses, we’ve all seen Sanders denounce other people’s conspicuous consumption, and again, doesn’t carve out any discernable exceptions for a well-earned indulgence: “How many yachts do billionaires need? How many cars do they need? Give us a break. You can’t have it all.” Keep in mind, you don’t have to be a millionaire or billionaire to be engaged in forms materialist consumerism that Sanders finds morally abhorrent: “You don’t necessarily need a choice of 23 underarm spray deodorants or of 18 different pairs of sneakers when children are hungry in this country.”

Bernie Sanders is irked by the variety of deodorants at your local convenience stores, or the diverse assortment of sneakers available at Foot Locker or DSW. In his mind, you don’t need that, so you shouldn’t have that. But he insists his owning three houses shouldn’t bother anyone. He needs them.

During the debate, Sanders seemed to find the idea that anyone could object to his three houses ridiculous.

SANDERS: Well, you’ll miss that I work in Washington, house one.

SANDERS: And like thousands of other Vermonters, I do have a summer camp. Forgive me for that.

By the way, that “summer camp” is four bedrooms, two bathrooms, 500 feet lakeside with a dock, 1.13 acres, with a separate guest cottage.

What makes Sanders’s millionaire status and three houses so insufferable is the senator’s adamant insistence that his wealth is earned and that his summer home is a well-deserved luxury, but just about everyone else’s are examples of “something profoundly wrong” with America, and inherently exploitative, harsh, cruel, and unjust.