A look at the emerging US, Taliban peace deal 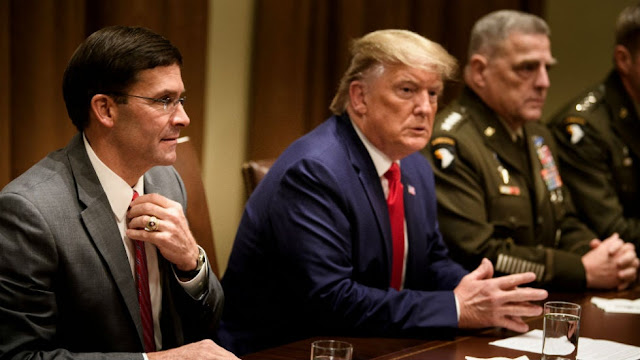 The United States and the Taliban are on the verge of signing what would be a historic agreement aimed at winding down America's longest war, potentially fulfilling one of President Trump's key promises.

The initial agreement to reduce violence is aimed at building confidence ahead of signing a broader peace agreement.

If the reduction in violence holds, U.S. and Taliban negotiators will sign the broader agreement Feb. 29, starting a phased withdrawal of U.S. troops in exchange for Taliban guarantees that Afghanistan will not be used as a base for terrorist attacks against the West.

But that's not the end of the peace process. Intra-Afghan talks will start after the U.S.-Taliban deal signing — a critical stage where the entire process has the potential to collapse.

Many details of the deal and how it will work remain murky. But here are five things to know now about the U.S.-Taliban deal.

This week is not a cease-fire

The reduction in violence agreement is specifically not being billed as a cease-fire, which the Taliban rejected.

But the United States, the Taliban and Afghan government forces are expected to largely end all offensive operations throughout the country.

The United States has not spelled out all the metrics being used to measure the success of the reduction in violence period, though a senior administration official told reporters in Germany this month that the terms were "very specific."

U.S. and Afghan forces, meanwhile, are expected to continue carrying out counterterrorism operations against ISIS and al Qaeda.

At a Pentagon briefing this past week, Rear Adm. William Byrne Jr. of the Joint Staff said Gen. Scott Miller, who leads U.S. and NATO forces in Afghanistan, will oversee a "continual evaluative process" on whether the reduction in violence is holding.

One key question throughout the peace talks has been whether the Taliban leaders negotiating in Doha can keep all the elements of their group in line once a deal is in place.

In addition to questions about whether all Taliban fighters will adhere to the deal, there are also concerns that an extremist group such as ISIS could try to play spoiler by staging an attack and blaming it on the Taliban.

Alternatively, there are concerns Taliban fighters could try to pin one of their attacks on another group.

Asked about the possibility of such misinformation, Pentagon officials insisted they would be able to verify the responsible party.

"So, we're not going to use, you know, the Taliban Twitter account as the gold standard for what has and has not happened in Afghanistan," chief Pentagon spokesman Jonathan Hoffman said at the briefing. "We will continue, as we always have, to do our own investigations and reach our own conclusions and ensure that there is a pathway forward."

Meanwhile, Pakistan, which has long been seen as a spoiler in Afghanistan, has been supportive of the Trump administration's peace talks.

"Pakistan welcomes the announcement regarding the U.S.-Taliban agreement," Pakistan's Foreign Ministry said in a statement Friday. "We hope the Afghan parties would now seize this historic opportunity and work out a comprehensive and inclusive political settlement for durable peace and stability in Afghanistan and the region."

The US isn't ready for a full withdrawal yet

The Pentagon hasn't said whether the United States agreed to withdraw all troops, but officials have talked about keeping a counterterrorism force there for the time being.

The 12,000 or so U.S. troops in Afghanistan right now have two missions: helping Afghan forces fight the Taliban and conducting counterterrorism operations against al Qaeda and ISIS.

Defense officials, including Defense Secretary Mark Esper, have said they believe 8,600 troops are sufficient to carry on the counterterrorism mission. Even getting to that number, Esper has said, will happen "over time."

Still, the Taliban continues to insist the end result of the peace process be a full withdrawal, with its statement Friday saying the reduction in violence deal will "finally lay the groundwork for peace across the country with the withdrawal of all foreign forces."

The hardest part is yet to come

Skeptics of the Trump administration's peace efforts have long said the most difficult part will be intra-Afghan talks.

It's also the most critical part, they say, because peace won't happen without political reconciliation in Afghanistan.

The Taliban has previously resisted talks with the Afghan government, which it sees as a puppet of the United States.

Ghani was just declared the winner of the September 2019 presidential elections this past week. But he got only 50.64 percent of the vote, just a smidge above the 50 percent needed to win.

And his chief rival, Abdullah Abdullah, is still disputing the election results, claiming victory himself and pledging to form a government of his own.

Given the difficulties of intra-Afghan talks and questions about the Taliban's trustworthiness, lawmakers are cautioning against declaring the end of the Afghanistan war quite yet.

As the Trump administration appeared on the cusp of the deal announced Friday, lawmakers in both parties told The Hill that peace was still a long way off.

Sen. Lindsey Graham (R-S.C.), a close Trump ally and leading GOP defense voice, said he was "willing to give" the Trump administration's plan "a try." But he also ticked off a list of conditions he would consider an "honorable resolution," including a deal that protects human rights and women's rights and allows the United States to continue to "protect the American homeland from international terrorists."

Rep. Mac Thornberry (Texas), the top Republican on the House Armed Services Committee, questioned how the United States would verify whether intra-Afghan talks are "real" or "a fig leaf."

Lawmakers also noted the Trump administration was previously close to signing a deal with the Taliban before it fell apart at the last minute. In September, Trump invited Taliban leaders to Camp David to finalize a deal but called off the meeting after a Taliban attack killed a U.S. service member.