A few thoughts on Trump's 2020 budget 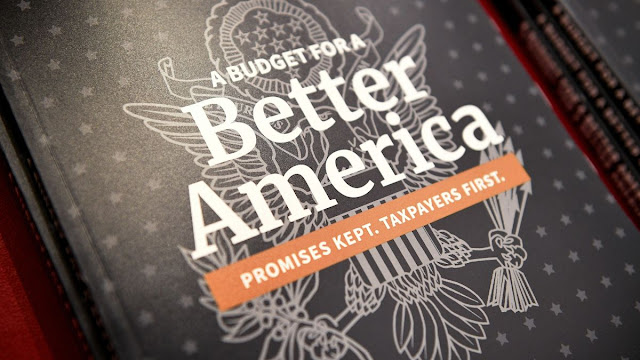 President Trump unveiled a $4.8 trillion budget for the next fiscal year on Monday that proposes dramatic cuts to domestic spending and new tax cuts, while presenting an optimistic path for reducing deficits that relies on broad economic growth.

The proposal is dead on arrival with the Democratic House, particularly in an election year. Yet it is likely to color the debates surrounding the presidential campaign and could also foreshadow fights to come if Trump wins a second term.

Trump is winning on the wall

Trump’s signature campaign vow is to build a wall along the Mexican border, and have Mexico pay for it.

In the new budget for fiscal 2021, Trump reduces his budget request to Congress for the wall from $5 billion to $2 billion.

At a glance, that might be seen as a sign Trump is giving ground; in reality, it shows how he has successfully dodged Congress to provide funds for the wall without the cooperation of Democrats.

Trump was able to transfer billions of dollars to the wall through emergency powers after a fight over wall funding triggered the longest government shutdown in U.S. history last year.

The White House estimates that Trump has $18 billion in the bank for the wall, a sum that includes small portions Congress has agreed to fund as well as reprogrammed money from the Treasury, the Department of Defense and military construction.

Congress has failed to overturn the emergency powers Trump has used to win money for the wall, and GOP appropriators stopped Democrats from blocking his transfer authority in last year’s spending bill. The result, the White House says, is that even though they’ve only built 100 miles of wall, they have enough for 10 times that much.

One downside for Trump is that the reprogramming from military construction projects means those efforts go unfunded. That allows Democrats to argue that Trump effectively killed projects to fix barracks and build schools on military bases for his wall.

When Trump released his first budget proposal, it projected that the deficit would fall to $456 billion by 2021 and disappear by 2027. His administration brushed aside critiques that its projections were unrealistic and relied on overly optimistic economic projections.

Monday’s proposal put the 2021 deficit at nearly $1 trillion, and Trump’s White House is predicting that it will take 15 years to eliminate the deficit. It is still relying on the same cheerful economic predictions it has used in previous budgets, which are significantly higher than those projected by the Federal Reserve, the Congressional Budget Office and Wall Street banks.

“Even with rosy economic assumptions and proposed spending discipline that flies in the face of recent experience, the president’s budget would still be in deficit over the next 10 years,” said Robert L. Bixby, executive director of The Concord Coalition, which advocates for lowering the debt.

Beyond those estimates, Trump’s budget could cut the deficit without raising taxes by stripping out $4.4 trillion in spending over the next decade.

About half of that comes from bone-deep cuts to domestic agencies, covering anything from environmental protection and foreign aid to education and transportation. The other half comes from scaling back health and anti-poverty programs. Both are non-starters in Congress.

Trump wants a deal on drug prices, but is skeptical of infrastructure

Acting White House budget chief Russell Vought was adamant while rolling out the budget that Trump wants a deal with Congress on prescription drug prices.

The new budget leaves a blank space for a prescription drug bill, which the administration says represents an offer to work with Democrats.

The White House is less open to a deal on infrastructure, the area where Democrats are expressing an eagerness to do business.

Yet the two sides are far apart on how to pay for new roads and bridges, and the last meeting between Trump and Pelosi on the topic ended in disaster.

“They would want to put tax increases on the table and we would be loath to do that,” a senior administration official said.

Entitlements will be a 2020 fight

Democrats have made protecting entitlement programs such as Social Security, Medicare and Medicaid a staple of their platform, alongside anti-poverty programs such as the Supplemental Nutrition Assistance Program (food stamps), housing assistance and various tax credits.

While Trump vowed to protect Medicare and Medicaid in his State of the Union speech, Democrats will seize on his budget as proof that he is not really committed to doing so.

The budget includes $2 trillion in entitlement cuts over a decade, including plans to block-grant Medicaid and reduce its growth from 5 percent a year to 2 percent.

Trump wants to impose new work requirements on many of the programs, and to limit certain benefits to families.

The White House budget also finds savings in Medicare, but it argues this reduced spending would not come through cuts to beneficiaries but through lower provider payments.

Democrats such as House Budget Committee Chairman John Yarmuth (D-Ky.) say even that could undermine rural hospitals that depend on Medicare payments.

“You reduce those revenues and you jeopardize them,” he said.

For months, Trump and his advisers have said they will propose another round of tax cuts, and the new budget carves out $1.4 trillion for reduced taxes.

The budget assumes that the individual tax cuts from the 2017 GOP tax law will not expire in 2025, but there is some confusion as to the $1.4 trillion figure. The entirety of the GOP tax law amounted to $1.5 trillion on paper when it passed.

Budget-watchers note that the inflated figure could be a hint toward a broader tax cut plan.

White House chief economic adviser Larry Kudlow said a fuller plan would roll out in the summer, and could include everything from lower capital gains taxes to restoring some version of the state and local tax deduction.