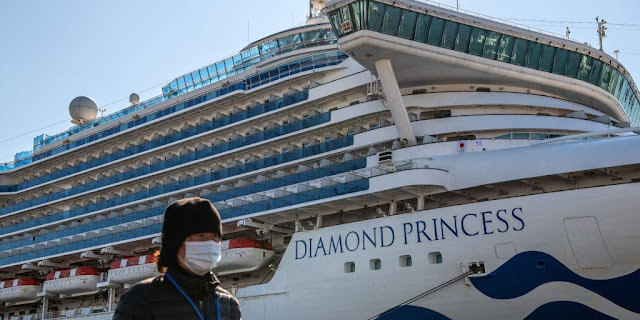 More than 300 Americans who were passengers aboard the Diamond Princess cruise ship, which was quarantined at sea in Japan over the coronavirus outbreak, have evacuated the country on two flights chartered by the U.S. government, officials said.

The flights departed from Tokyo International Airport and were expected to land back in the United States early Monday morning. Among those on board are 14 passengers who have been diagnosed with the novel coronavirus, known officially COVID-19, according to a joint statement from the U.S. Department of State and the U.S. Department of Health and Human Services.

"During the evacuation process, after passengers had disembarked the ship and initiated transport to the airport, U.S. officials received notice that 14 passengers, who had been tested 2-3 days earlier, had tested positive for COVID-19," the statement said. "These individuals were moved in the most expeditious and safe manner to a specialized containment area on the evacuation aircraft to isolate them in accordance with standard protocols. After consultation with HHS officials, including experts from the HHS Office of the Assistant Secretary for Preparedness and Response, the State Department made the decision to allow the 14 individuals, who were in isolation, separated from other passengers, and continued to be asymptomatic, to remain on the aircraft to complete the evacuation process."

"During the flights, these individuals will continue to be isolated from the other passengers," the statement continued. "All passengers are being closely monitored by medical professionals throughout the flight, and any who become symptomatic will be moved to the specialized containment area, where they will be treated."

Upon arriving in the United States, all passengers will remain under quarantine for 14 days. Those who develop symptoms in flight and those with positive test results will remain isolated on board the aircraft until they are transported to "an appropriate location for continued isolation and care," according to the statement.