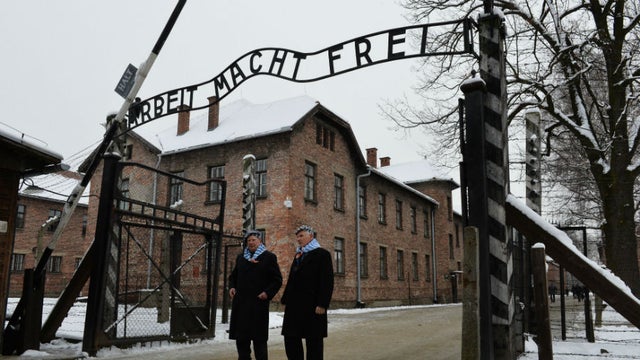 U.S. officials will join 50 world leaders traveling to Jerusalem this week to participate in the fifth annual World Holocaust Forum, marking 75 years since the liberation of the Auschwitz concentration camp.

The gathering this year comes against the backdrop of global rising anti-Semitism and deadly attacks against Jews.

Vice President Pence is the most senior administration official traveling to the commemoration and is set to arrive on Thursday, his office said.

He is one of five leaders scheduled to address the forum, in part making up the allied forces that defeated Nazi Germany in World War II, including the U.K., France and Russia.

Germany’s president will also give remarks at the event.

The event marks Israel’s largest diplomatic gathering ever and will officially begin on Thursday, with ceremonies commemorating the victims of the Holocaust.

Yet the somber and reflective event has also drawn controversy, pitting Poland against Israel and Russia for being denied speaking time at the event and with Washington stepping into the conflict on behalf of Warsaw.

Polish President Andrzej Duda announced earlier this month that he planned to boycott the event, protesting that Poland was not included in the list of public speakers and condemning that Russian President Vladimir Putin was being given a platform to speak.

Duda accuses Putin of promoting a revisionist history of the Holocaust, and has condemned him for suggesting that Poland was complicit in the outbreak of World War II, the Polish president’s office said in a statement.

Poland has fought back against accusations that it was complicit in the genocide of the six million Jews murdered in the Holocaust and was a victim of Nazi Germany, coming under occupation in 1941.

In 2018, a controversial law took effect in Poland criminalizing references to concentration camps established under Nazi Germany as “Polish.”

The law raised alarms in Israel, where it was criticized as stifling historical research on the Holocaust.

The fight has contributed to a larger rift that has developed between the two countries over a number of issues, including rising anti-Semitism in Poland and efforts to block restitution payments to the families of Polish-Jewish survivors of the Holocaust.

Washington sought to quell increasing tension between Warsaw and Jerusalem ahead of the forum, Bloomberg reported, with Tom Rose, a senior advisor to Pence, telling the outlet that the U.S. is “very disappointed by what we view as a preventable and unnecessary snub” between two American allies, placing responsibility on Israel for failing to accommodate Poland at the event.

Lithuania’s president reportedly pulled out of attending the event in solidarity with Poland against Russia, while a parliamentary delegation is still expected to attend.

The 50 leaders and royal representatives from across Europe as well as North America and Australia will first convene for a dinner with Rivlin on Wednesday night.

The event is organized by the World Holocaust Forum Foundation and Yad Vashem, Israel’s Holocaust memorial and museum. The intention of the event is to support the memory of the Holocaust and raise awareness to combat anti-Semitism.

In the U.S., a number of violent and deadly attacks on American Jews have shook the nation over the threat of anti-Semitism. In December, three people and a New Jersey police officer were killed in the targeted shooting of a kosher supermarket.

Just over two weeks later, a Hanukkah celebration in Monsey, N.Y., turned to tragedy when a man entered the home of a rabbi and attacked worshippers with a machete, injuring five people.

The Anti-Defamation League (ADL), an organization that was founded to track hate speech and attitudes against the Jewish people, has measured an increase in anti-Semitic feelings across the world, including that about 1 in 4 Europeans “harbor pernicious and pervasive attitudes toward Jews,” according to its latest survey published in November.

“It is deeply concerning that approximately one in four Europeans harbor the types of anti-Semitic beliefs that have endured since before the Holocaust,” Jonathan A. Greenblatt, the ADL's CEO, said in a statement at the time.

“These findings serve as a powerful wake-up call that much work remains to be done to educate broad swaths of the populations in many of these countries to reject bigotry, in addition to addressing the pressing security needs where violent incidents are rising.”