What happen to all of the diversity in the Democratic presidential primary? 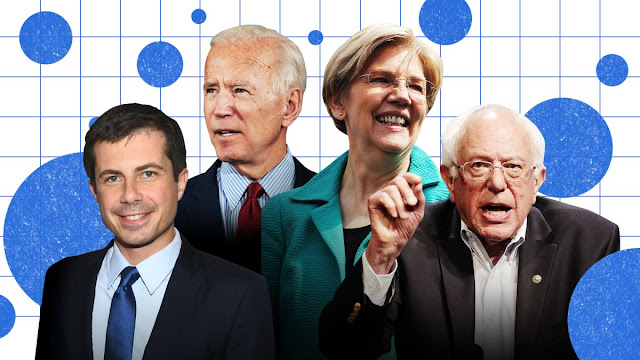 As Democrats contemplate a race that has effectively come down to Joe Biden, Bernie Sanders, and maybe Pete Buttigieg, Elizabeth Warren, and Mike Bloomberg, they’re asking themselves how a primary process that began with so many options ended up with a top tier of three old men, four candidates over 70, only one woman, and no ethnic minorities, unless you count Warren’s 1/1024 claim of Native-American heritage.

Anyone who wants to be president has to have the ability to stand out in a crowd — not just being more appealing than the garden-variety senators and governors, but being more memorable discussing policy in 90 seconds than Marianne Williamson discussing a “dark psychic force.” What a candidate brings to the table has to be unique and succinct. “Young gay veteran religious Midwestern mayor” stood out. “Wonky middle-aged Asian-American tech CEO focused on automation” stood out. “That senator from Colorado who wants to build opportunity for everyone” and “that congressman from Maryland promising ‘real solutions’” did not stand out. “Generic Democrat” is supposed to be a placeholder in polling surveys, not a presidential campaign’s identity.

Losing a Senate race by a closer-than-expected margin, as Beto O’Rourke did, is not really a proper stepping-stone to a presidential race. Being a rising star and a member of a key demographic counts for a lot less than Julian Castro thought it would. The glamour that wows Vogue magazine leaves Iowans unimpressed as they nudge past to get some ranch dressing.

Biden and Sanders are walking out of this yearlong endurance test with a solid base of support because each man walked into this primary with a solid base of support. They didn’t need to introduce themselves to many voters. Probably about half the country’s Democratic primary voters weren’t all that interested in meeting new candidates. They knew which one they already liked, and they stuck with him.

If you’re a Republican thinking of running for president in 2024 — or a Democrat not so certain of a victory in 2020 and thinking of running four years later — you need to adapt to this new reality. Your national reputation has to be well-established by late 2022. You cannot count on making a splash in the debates; candidates like Cory Booker and Julian Castro and Amy Klobuchar had perfectly fine debates that never resulted in much movement in the polls.

Presidential primaries are rough and merciless territory. Candidates should know what they’re getting into before they announce.