US forces fire tear gas at protesters outside Baghdad embassy 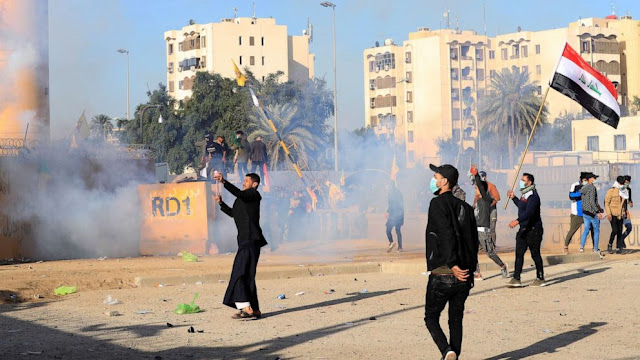 American forces fired tear gas on protesters Wednesday, a day after a large group of militia stormed and breached the gates of the U.S. Embassy in Baghdad.

Wednesday, the group lit a fire on the roof of the reception area, ABC News said the Associate Press reported, which prompted a response from the U.S. military.

The New York Times reported that protesters, the group much smaller than Tuesday's demonstration, tried to climb on the roof of the guard post and jump inside the compound. This move also prompted American forces to fire tear gas on them.

The Times reported that an even larger number of demonstrators attempted to climb the roof at around midday, but were stymied by yet another round (about four volleys) of tear gas, finally pushing the protestors back from the compound's front gate.

An Iraqi general deployed to the area said, "This is not good — they have to stay away from the wall," adding American forces “are right when they fire tear gas because otherwise the protesters will get inside the compound, but we are caught in between," according to the news source.

Wednesday's outbursts follow a protest that broke out Tuesday, when the group of Iranian-backed militia stormed the U.S. Embassy in Baghdad in response to previous airstrikes by the U.S. military targeting Kata'ib Hezbollah groups in Syria and Iraq. The strikes killed 25 militia fighters.

On Tuesday night, Sec. of Defense Mark Esper said that an additional 750 troops would be deployed to the region to help stabilize the area and protect the Americans at the embassy.

The U.S. fired on Kataib Hezbollah forces after the Trump administration blamed the organization for an attack that killed an American contractor and wounded five U.S. service members.