US faces new problems in Iraq 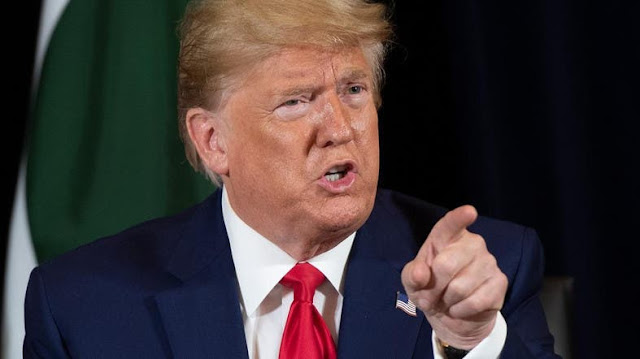 The U.S. mission in Iraq ended the year on a violent note Tuesday as supporters of an Iran-backed militia breached the gates of the U.S. Embassy in Baghdad, vandalizing the property and causing U.S. diplomats to hide in lockdown.

The developments put a question mark on the future of the U.S. presence in Iraq, as lawmakers and others in Washington debated the significance of the crisis and how the United States should respond.

President Trump and his supporters put the blame for Tuesday’s incident squarely on Iran, making the embassy drama the latest chapter in U.S.-Iran tensions that some have feared could lead to war.

“Now Iran is orchestrating an attack on the U.S. Embassy in Iraq. They will be held fully responsible,” Trump tweeted. “In addition, we expect Iraq to use its forces to protect the Embassy, and so notified!”

But Trump’s critics put the blame on him, accusing him of an erratic Middle East policy that led to Tuesday’s scene.

“The attack on our embassy in Baghdad is horrifying but predictable,” Sen. Chris Murphy (D-Conn.) tweeted. “Trump has rendered America impotent in the Middle East. No one fears us, no one listens to us. America has been reduced to huddling in safe rooms, hoping the bad guys will go away. What a disgrace.”

The latest spike in tensions was triggered over the weekend when the Trump administration blamed the Iranian-backed Kataib Hezbollah militia for an attack that killed a U.S. contractor and wounded four U.S. service members.

In response, the U.S. carried out airstrikes Sunday against five Kataib Hezbollah targets in Iraq and Syria, killing at least 25 militia fighters.

Thousands of demonstrators stormed the U.S. Embassy compound in Baghdad early Tuesday in response to the airstrikes, with some in militia uniforms chanting “Death to America.” Footage emerged of protesters breaching the compound walls and setting small fires at the facility.

Defense Secretary Mark Esper said additional U.S. forces would be deployed to the facility in Baghdad to bolster security, and he called on Iraq to assist in the protection of embassy personnel.

On Tuesday night, Esper said 750 troops would be deployed to the region "immediately," and that additional forces were prepared to deploy in the coming days.

A State Department spokesperson said the U.S. ambassador to Iraq would return to the embassy after a previously scheduled trip.

Iraq has been roiled by anti-government protests over the last few months, fueled in part by opposition to Iranian influence in the country. There have also been broader concerns about all foreign influence, including from the United States, but Tuesday’s demonstrators were from different factions than the earlier protests.

Trump, who has spent the last 10 days at his Mar-a-Lago resort in Florida, briefly addressed the escalating situation on Tuesday night.

“I think it’s been handled very well...we had some great warriors come in," Trump told reporters before attending a New Year's Eve party at his resort. "This will not be a Benghazi...they got in there very quickly.”

When asked about the possibility of war with Iran, Trump responded: “I don't see that happening."

Earlier in the day, Trump sent several tweets about the embassy attack.

In addition to the tweet accusing Iran of orchestrating the attack, Trump tweeted an entreaty to “those many millions of people in Iraq who want freedom and who don’t want to be dominated and controlled by Iran,” telling them, “this is your time!”

Trump has met with members of his national security team in recent days. The president spent just under an hour at his golf club in West Palm Beach on Tuesday where he said he had a “very good meeting on the Middle East, the Military, and Trade.”

Esper, Secretary of State Mike Pompeo and Joint Chiefs of Staff Chairman Gen. Mark Milley briefed Trump at Mar-a-Lago on Sunday to discuss the aftermath of the U.S. airstrikes in the Middle East and lay out other options to deter “bad behavior” in the region.

Trump has made confronting Iran a cornerstone of his foreign policy, but has sought to balance his tough rhetoric with his desire to avoid further entanglement in foreign wars.

The past year was marked by several instances of near-conflict, including in June after the U.S. accused Iran of shooting down an American drone and in September after an attack on Saudi oil facilities.

As the embassy was under assault Tuesday, Iran hawks in the United States pointed fingers at Tehran.

“When an Iran-backed militia killed an American in Iraq last week, it met with a firm response,” Sen. Tom Cotton (R-Ark.) tweeted. “Now our embassy in Baghdad—sovereign U.S. territory—has been attacked in yet another reckless escalation. As the president notes, Iran must be held responsible.”

Sen. Marco Rubio (R-Fla.) called arguments that U.S. actions led to the assault “garbage,” while Sen. Lindsey Graham (R-S.C.) warned Iran that "they continue to threaten American interests at their own peril.”

John Bolton, one of Trump’s former national security advisers, called Tuesday’s incident in Baghdad “straight from Iran's playbook in 1979” when Iranians stormed the U.S. Embassy in Tehran and set off the Iran hostage crisis.

The events in Iraq also prompted allusions to the 2012 attack on the U.S. compound in Benghazi, Libya, where Ambassador Christopher Stevens was killed.

Graham, who said he met with Trump on Tuesday to discuss the situation, pledged there would be “no more Benghazis.”

“President Trump is determined to protect American personnel and expects our Iraqi partners to step up to the plate,” Graham tweeted.

Iraqi security forces reportedly did nothing to stop the demonstrators from advancing until a commander arrived and ordered them to.

Trump spoke with Iraqi Prime Minister Adil Abd al-Mahdi on Tuesday and "emphasized the need to protect United States personnel and facilities in Iraq," according to the White House.

Pompeo also spoke with al-Mahdi and Iraqi President Barham Salih separately by phone after the embassy was breached, making clear to them the United States would “protect and defend its people.”

They, in turn, assured Pompeo they “would guarantee the safety and security of U.S. personnel and property,” according to a State Department statement about the calls.

On Monday, the Iraqi government issued a blistering statement condemning the U.S. strikes on Kataib Hezbollah, saying the United States violated Iraqi sovereignty by conducting them unilaterally. The government added it would “review the relationship” with the U.S.-led coalition in Iraq.

On Tuesday, Iraq continued to condemn the U.S. strikes, but also pledged to respond to “any act of aggression or harassment” against an embassy.

“While we condemn the US air strikes on Iraqi military units, and acknowledge that symbolic funeral marches for the martyrs is a solemn act of remembrance, those taking part must stay away from diplomatic buildings and compounds,” al-Mahdi said in a statement.

“Iraqi security forces will respond to any act of aggression or harassment against foreign embassies in Iraq, and those responsible will face the full force of the law,” he added.

With the situation spiraling, Democrats called for tensions to be lowered as they expressed concern about the safety of U.S. personnel.

“The storming of our embassy in Baghdad by protestors and Iran-backed militias is deeply disturbing,” House Intelligence Committee Chairman Adam Schiff (D-Calif.) said in his own tweet. “The first priority is the safety of our personnel. Iraq has an obligation to protect them. Once secure, we need to be clear-eyed about reducing tensions and the path forward.”

Highlighting Iraq’s opposition to the U.S. strikes, Sen. Tim Kaine (D-Va.) tweeted that “Trump’s malpractice in the region is making us less safe. Time for Congress to stop this foolish rush to war.”