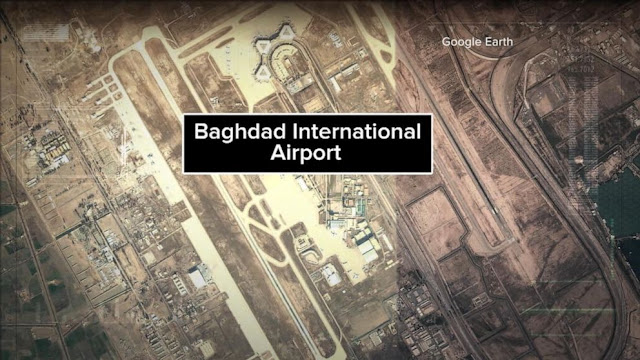 One of Iran’s most powerful generals was killed in a U.S. airstrike in Baghdad, the Pentagon confirmed Thursday, a development that is sure to send shockwaves throughout the Middle East and prompt retaliation from Iran.

“At the direction of the President, the U.S. military has taken decisive defensive action to protect U.S. personnel abroad by killing Qasem Soleimani, the head of the Iranian Revolutionary Guard Corps-Quds Force, a U.S.-designated Foreign Terrorist Organization," the Pentagon said in a statement.

"This strike was aimed at deterring future Iranian attack plans," the Pentagon added. "The United States will continue to take all necessary action to protect our people and our interests wherever they are around the world."

President Trump, without any additional comment, tweeted a picture of the American flag Thursday night after the reports of Soleimani's death emerged.

“The defensive actions the U.S. has taken against #Iran & its proxies are consistent with clear warnings they have received,” Sen. Marco Rubio (R-Fla.) tweeted. “They chose to ignore these warnings because they believed @POTUS was constrained from acting by our domestic political divisions. They badly miscalculated.”

Rep. Mark Meadows (R-N.C.) tweeted without elaboration: “America has the greatest military in the world. God bless our soldiers.”

The reverberations from Soleimani’s death could be multitude, including the possibility that the proxy war that has been building between the United States and Iran could spill out into open conflict.

The U.S. military struck an Iran-backed militia in Iraq on Sunday after a rocket attack Friday that the Trump administration blamed on the militia killed a U.S. contractor and wounded four U.S. troops.

The militia and its supporters responded by storming the U.S. Embassy in Baghdad on Tuesday, prompting the U.S. military to deploy 100 Marines as reinforcements at the embassy and 750 more troops to the region.

The situation appeared calmer earlier Thursday after the demonstrators withdrew from the embassy compound the day before.

But Defense Secretary Mark Esper warned Thursday morning that the United States had indications Iran or its proxies could carry out more attacks — adding that the U.S. military was prepared to take preemptive action.

In its statement Thursday night, the Pentagon accused Soleimani of “actively developing plans” to attack U.S. troops and diplomats in Iraq and the region.

“He had orchestrated attacks on coalition bases in Iraq over the last several months — including the attack on December 27th — culminating in the death and wounding of additional American and Iraqi personnel," the Pentagon said. "General Soleimani also approved the attacks on the U.S. Embassy in Baghdad that took place this week."

But as news spread of Soleimani’s death, critics questioned whether Trump, who has claimed to want to end so-called forever wars in the Middle East, was prepared to handle the ramifications that could come.

“Soleimani was an enemy of the United States. That’s not a question,” Sen. Chris Murphy (D-Conn.) tweeted. “The question is this — as reports suggest, did America just assassinate, without any congressional authorization, the second most powerful person in Iran, knowingly setting off a potential massive regional war?”