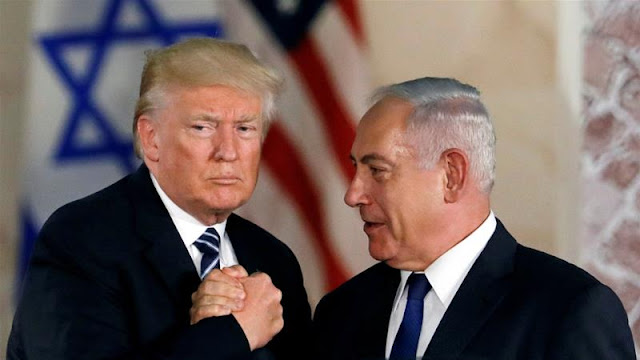 President Trump on Tuesday unveiled the most anticipated foreign policy agenda of his presidency, throwing his support behind a two-state solution to the Israeli-Palestinian conflict that comes amid a cloud of skepticism about whether the plan is feasible.

The proposal puts to rest criticisms that the Trump administration had departed from decades of U.S. policy supporting an independent Palestinian state next to a secure Jewish state of Israel.

“My vision provides a win-win opportunity for both sides. A realistic two-state solution that resolves the risk of Palestinian statehood to Israel’s security,” the president said in prepared remarks from the East Room of the White House, standing next to Israeli Prime Minister Benjamin Netanyahu. “Crucially, the proposed transition to a two-state solution will prevent no incremental security risk to the state of Israel.”

Trump said the Palestinians will receive “more than double” the territory they currently administer and will have a capitol established in eastern Jerusalem and where “America will proudly open an embassy.”

Despite ceding territory in Jerusalem to the Palestinians, Trump said that the Holy City will remain “undivided” under Israeli control.

“Under this vision, Jerusalem will remain Israel’s undivided — very important — undivided capitol,” he said of the plan.

Addressing the issue of Israeli settlements, Trump said “no Palestinians or Israelis will be uprooted from their homes.”

The president noted that both Netanyahu and his chief political opponent, Benny Gantz, have endorsed the plan and will work to implement the first steps after a third round of elections in that country and the expected formation of a government.

Trump touted an 80-page document that describes in detail territories recognized by the U.S. as belonging to Israel and parts of the West Bank slated for transitioning full control to an independent Palestinian government after fulfilling certain obligations.

“This is the first time Israel has authorized the release of a conceptual map illustrating the territorial compromises its willing to make for the cause of peace, and they’ve gone a long way,” he said.

The plan’s reveal occurred alongside Netanyahu, just weeks before he is set to compete in a contentious third round of national elections and the same day he became Israel's first sitting prime minister to be formally indicted.

The peace plan requires agreement and involvement from Palestinians, who have rejected the Trump administration’s efforts to start negotiations.

Trump on Tuesday made a direct appeal to Palestinian Authority President Mahmoud Abbas to engage with the plan, saying he sent a letter to the Palestinian leader.

He added that the plan provides for a period of four years where land that the Trump administration has designated for a Palestinian state will “remain open and undeveloped” so that the Palestinians can “study” and engage with the U.S. proposal.

Netanyahu said he would agree to begin negotiations with the Palestinians “on the basis of [Trump’s] peace plan.”

Tuesday’s event marked a culmination of sorts. Trump has promised throughout his three years in office that he would deliver a plan to foster peace between Israelis and Palestinians, but details had always been scarce and its release was repeatedly delayed.

There is much skepticism about the prospects of the plan taking root. Palestinian leaders cut off communications with U.S. officials in 2018 after Trump recognized Jerusalem as the capital of Israel and said the U.S. would relocate its embassy there.

As a result, Tuesday’s rollout was viewed among experts as largely ceremonial and an effort to score a political win while each of the leaders on stage faces domestic crises.

At the other end of Pennsylvania Avenue, the Senate was preparing to convene for the seventh day of Trump’s impeachment trial. Back in Israel, Netanyahu was indicted on corruption charges after withdrawing a request for immunity.

Trump has repeatedly pointed to his administration’s support for Israel to bolster his foreign policy bonafides and support among white evangelical voters.

“As everyone knows, I have done a lot for Israel,” he said Tuesday, citing the relocation of the U.S. embassy, recognizing Israeli sovereignty over the Golan Heights territory and withdrawing from the Iran nuclear deal.

"It is only reasonable that I have to do a lot for the Palestinians, or just wouldn't be fair,” he added.