Trump: Iran 'appears to be standing down' 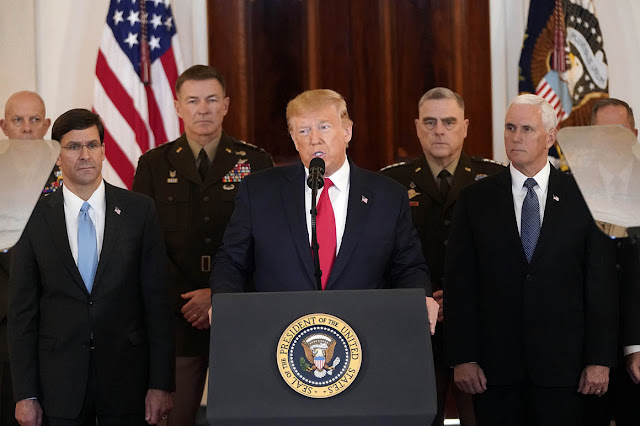 President Trump on Wednesday said Iran "appears to be standing down" in an address to the nation following missile attacks on two Iraqi bases housing U.S. military personnel.

Trump celebrated that no American lives were lost in the attacks, and announced that his administration would impose new “punishing” sanctions on Tehran until the regime changes its behavior.

Flanked by military leaders and White House officials including Vice President Mike Pence, Trump also seemed to be taking a victory lap of sorts after a week that saw the U.S. and Iran tiptoe toward a major military confrontation.

“I’m pleased to inform you, the American people should be extremely grateful and happy. No Americans were harmed in last night’s attack by the Iranian regime,” Trump said in remarks from the Grand Foyer of the White House.

“Our great American forces are prepared for anything,” he continued. “Iran appears to be standing down, which is a good thing for all parties concerned and a very good thing for the world."

Trump’s remarks signaled that he was moving toward sanctions against Iran instead of further military force after an airstrike he ordered last week killed Iranian Gen. Qassem Soleimani, the leader of the nation's elite Quds Force, which had been designated a terrorist organization by the U.S.

“As we continue to evaluate options in response to Iranian aggression, the United States will immediately impose additional punishing economic sanctions on the Iranian regime,” Trump said. “These powerful sanctions will remain until Iran changes its behavior.”

Besides Pence, the president was joined by Defense Secretary Mark Esper, Secretary of State Mike Pompeo and White House national security adviser Robert O’Brien. He was flanked by uniformed military officials as he read prepared remarks from a teleprompter.

Wednesday’s address came after days of escalating tensions between the U.S. and Iran that had raised concerns that the two nations were headed for war.

Trump, who has been averse to further entangling the U.S. in foreign conflicts, appeared to seek to dial back tensions in his remarks.

He appealed to Tehran to “work together” in fighting ISIS and on other “shared priorities.”

“The United States is ready to embrace peace with all who seek it,” Trump said in concluding his remarks.

Trump also used his remarks to criticize his predecessor, Barack Obama, for negotiating a “foolish” deal aimed at curbing Iran’s nuclear ambitions. The president claimed that the pact provided tens of billions of dollars to Iran, which he claimed had been used to fund the missiles fired by Iran late Tuesday.

Trump withdrew the U.S. from the Obama-era nuclear accord and reimposed sanctions on Iran, breaking with European allies. He urged those same allies on Wednesday to abandon the Iran deal and seek out a new pact.

The president met Wednesday morning prior to the address with Esper, Pompeo and members of his national security team.

Administration officials had spent Tuesday evening and Wednesday morning assessing next steps after Iran took responsibility for firing missiles at two bases in Iraq that house U.S. troops and coalition personnel. The U.S. reported no casualties from the strikes and Trump said Wednesday that no Iraqi lives had been lost.

Iranian officials said the strikes were a proportional response to a U.S. drone operation that killed Soleimani, the leader of Iran’s Quds Force who oversaw the country’s many proxy groups.

The Trump administration has characterized the strike on Soleimani as a defensive measure and urged de-escalation, but the move quickly ratcheted up tensions between Washington and Tehran while triggering concerns about the broader stability of the Middle East and complicating the U.S. presence in Iraq.

Trump continued to defend the strike in remarks on Wednesday, saying the U.S. had sent a “powerful message” to terrorists. Soleimani is said to have been responsible for the deaths of hundreds of U.S. troops in the Middle East over the years.

“Soleimani’s hands were drenched in both American and Iranian blood. He should have been terminated long ago,” Trump said.

Trump had previously warned of a forceful response if Iran struck American assets or individuals in retribution for Soleimani’s death.

Over the weekend, the president tweeted that officials had identified 52 targets in Iran, including those important to Iranian culture, and that they would strike them if Tehran retaliated by striking American assets or personnel. He also warned he might respond in a “disproportionate manner” if Iran were to hit U.S. assets.

Trump walked back the threat to hit Iranian cultural sites on Tuesday after backlash and accusations he would be violating international law, but vaguely warned Iran would suffer consequences if Tehran “does anything they shouldn’t be doing.”

Esper told reporters at a briefing Tuesday that the U.S. would respond “appropriately” in the event of Iranian retaliation.

“I think we should expect that they will retaliate in some way, shape or form,” Esper said. “We are prepared for any contingency and then we will respond appropriately to whatever they do.”

In the immediate aftermath of Tuesday’s missile strikes on the bases in Iraq, Trump tweeted “all is well.” Iran, meanwhile, said that it does not seek war with the United States but would defend itself against future aggression. Some close to the White House took the optimistic tone of the two messages as a sign the two sides would seek to avoid a drawn out conflict.

Sen. Lindsey Graham (R-S.C.), one of Trump’s closest allies, tweeted before Trump’s address that he saw no reason for “retaliation for the sake of retaliation” after the attacks.

“What is necessary is to lay out our strategic objectives regarding Iran in a simple and firm fashion,” said Graham, who on Tuesday night described the Iranian strikes as an “act of war.”