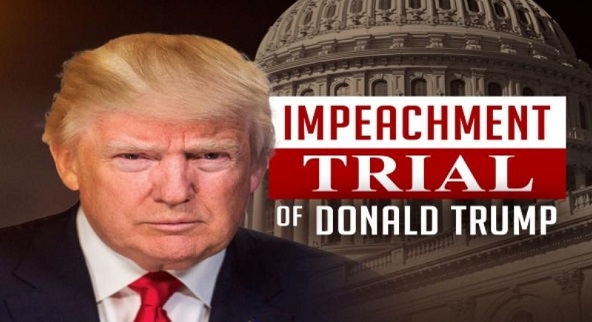 The Senate is barreling toward a bitter, potentially lengthy fight Tuesday over the rules governing President Trump’s impeachment trial.

After two days of pomp and bipartisanship last week, the battle over the trial proceedings is now expected to descend into raucous partisanship that threatens to hang over the rest of the trial.

The rules resolution — unveiled by Senate Majority Leader Mitch McConnell (R-Ky.) on Monday — provides House managers and Trump's legal team the same number of hours to make their opening arguments as in the Clinton proceeding but condenses those hours into fewer days. It also doesn't automatically admit House evidence into the trial.

Democrats immediately castigated the resolution as an attempt to push the debate over impeachment into the early morning hours and out of the public spotlight.

McConnell has said he has the 51 votes to enact the rules, suggesting all 53 Republicans will support it on the floor on Tuesday.
“I think phase one is pretty well determined,” said Sen. Kevin Cramer (R-N.D.).

But Democrats say they will force votes on calling additional witnesses and documents as part of the chamber’s debate on the trial rules. The resolution can be amended, giving Democrats an opening to shoehorn in what they view as politically tough votes for GOP senators up for reelection in 2020.

“As soon as Senator McConnell offers this resolution, I will be offering amendments to address the many flaws in this deeply unfair proposal and to subpoena the witnesses and documents we have requested," Schumer said.
Sen. Dick Durbin (D-Ill.) said he would leave the timing to Schumer but added that “there’s no question that we will raise this issue."

In addition to witnesses, Schumer said Democrats would seek to compel the White House to turn over three batches of documents related to the administration’s decision to delay almost $400 million in aid to Ukraine.

That funding is at the center of Democrats’ impeachment effort. The Government Accountability Office released a report Thursday saying the Office of Management and Budget withheld the appropriated funds last summer in order to advance the president’s own agenda in violation of the Impoundment Control Act.

Democrats need four Republican votes to call a witness or compel documents — a step that would, if successful, deal a major blow to Senate Majority Leader Mitch McConnell (R-Ky.) and hand Schumer a significant political victory.

But GOP senators, including potential swing votes, have indicated they will oppose efforts to call additional witnesses before they hear opening arguments and get the chance to ask questions at the trial. Democrats are expected to force another round of votes mid-trial, setting up a second pressure point.

Sen. Susan Collins (R-Maine) said in a statement she would not vote for witnesses at the outset of the trial, arguing that decision should wait until after the first phase, similar to the 1999 Clinton impeachment proceeding.

“Prior to hearing the statement of the case and the Senators asking questions, I will not support any attempts by either side to subpoena documents or witnesses. Instead, that issue should be addressed at the same point that it was in the 1999 trial,” Collins said.

Sen. Mitt Romney (R-Utah) has said he wants to hear from Bolton, but told reporters that like Collins he would not support an effort to secure witnesses at the start of the trial.

“I am not going to vote in favor of witnesses until we’ve heard the opening case,” Romney said.

Sens. Lisa Murkowski (R-Alaska) and Lamar Alexander (R-Tenn.) have said they are keeping an open mind on calling witnesses, but have backed McConnell’s strategy on waiting until mid-trial to make that decision. The rules resolution is expected to guarantee a vote on whether additional evidence is needed.

“The resolution I am supporting guarantees a vote on whether we need additional evidence at the appropriate time. Except for not including a motion to dismiss after senators have asked questions, the resolution establishes fundamentally the same rules that the Senate approved ...  for the Clinton impeachment trial in 1999," Alexander said on Monday.

Despite the pre-baked nature of the floor fight, it could still stretch on for hours. The Senate isn’t expected to start the impeachment trial until 1 p.m. on Tuesday. Each amendment to the impeachment trial rules, according to aides, will receive up to two hours of debate, evenly divided between Trump’s legal team and the House managers.

Another curveball is whether senators go into closed session so they can debate the rules, which would involve turning off the cameras and removing staff from the chamber. The closed-door proceeding would be the only way senators could talk on the floor about the rules.

GOP leadership aides have warned that a closed session is possible and any senator could make a motion to cloister their colleagues and try to hash things out privately. But some senators have publicly vowed to try to keep as much of the trial deliberations as open as possible.

“I would like it to be as open — I mean, might there be an occasional moment where we think we might come together in closed session? Yes, but the strong presumption is to be open, and I want to see as much of it open as possible,” Schumer said.

Sen. Thom Tillis (R-N.C.) also predicted senators would likely delay going into closed session until after phase one of the trial — opening arguments and questions from senators.

“I doubt it,” he said. “I don’t think we’ll probably go into closed session until after the rules.”