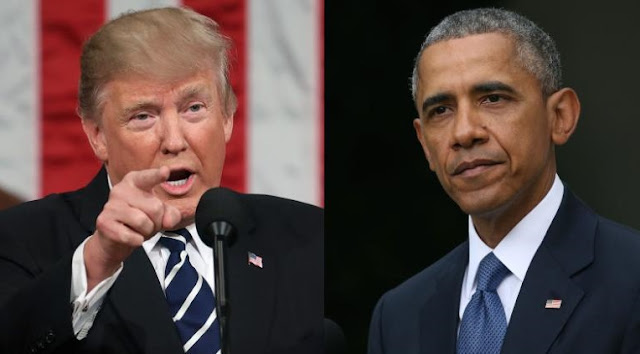 President Trump on Wednesday accused the Obama administration of providing funding to Iran that facilitated the country's missile strikes a day earlier against Iraqi bases that house U.S. forces.

"The missiles fired last night at us and our allies were paid for with the funds made available by the last administration," Trump said in prepared remarks from the Grand Foyer of the White House.

Trump addressed the nation in the wake of escalating military action between the U.S. and Iran. While the majority of the president's prepared remarks were focused on scaling back tensions between the two sides, he took several partisan jabs at the Obama administration for its policy toward Iran.

The president hammered the Obama-era Joint Comprehensive Plan of Action (JCPOA), which granted Tehran sanctions relief in exchange for curbs on its nuclear program. Trump withdrew the U.S. from the deal in 2018.

"Iran's hostilities substantially increased after the foolish Iran nuclear deal was signed in 2013," Trump said, though the deal was actually signed in 2015.

"Instead of saying thank you to the United States, they chanted 'death to America.' "

The president repeated his claim that the deal provided Iran with $150 billion and an additional $1.8 billion in cash, which he asserted was used to fund a "terror spree" in the Middle East.

Trump urged the other signatories of the JCPOA — Great Britain, Germany, France, Russia and China — to "break away from the remnants of the Iran deal" and work to forge a new one.

"We must all work together toward making a deal with Iran that makes the world a safer and more peaceful place," Trump said.

The $150 billion amounted to Iranian assets that were unfrozen as part of the sanctions relief included in the deal. The $1.8 billion was paid because of undelivered military equipment from the U.S. to Iran in the 1970s, according to a fact-check by The Associated Press.

Many of those same allies have expressed unease amid escalating tensions between the U.S. and Iran, which reached a tipping point in recent days.

But the president said Wednesday that Iran appeared to be standing down, an indication the two sides may seek to ease back tensions.