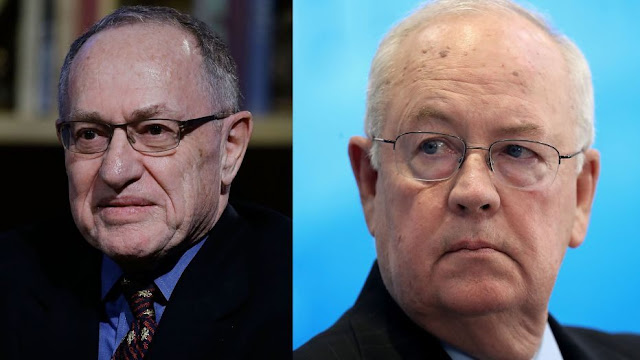 President Trump’s impeachment defense team for his Senate trial will include Alan Dershowitz and Ken Starr, sources confirmed on Friday.

Bondi was hired by the White House in November to help its communications team with impeachment messaging. She has appeared on television to defend the president throughout the House inquiry.

Starr and Dershowitz have also made regular television appearances defending Trump against impeachment, a key factor for a president who values media savvy.

Starr will no longer work as a contributor for Fox News given his role in the impeachment trial, the network confirmed Friday.

Dershowitz confirmed that he would present oral arguments at the Senate trial to “address the constitutional arguments against impeachment and removal.”

"Professor Dershowitz will present oral arguments at the Senate trial to address the constitutional arguments against impeachment and removal," read a statement on Dershowitz's addition to the team. "While Professor Dershowitz is non partisan when it comes to the constitution—he opposed the impeachment of President Bill Clinton and voted for Hillary Clinton— he believes the issues at stake go to the heart of our enduring Constitution.”

Dershowitz later downplayed his role in an interview on Dan Abrams's SiriusXM radio show, saying he was not a "full-fledged member" of the defense team and that his role would be limited to an hourlong constitutional argument.

The lawyers will join White House counsel Pat Cipollone and his deputies, along with Sekulow, in defending Trump against articles of impeachment accusing him of abuse of power and obstruction of Congress. Cipollone is expected to take a leading role defending Trump in the impeachment trial in the Senate, which is set to begin in earnest next week.

While there has been talk for several weeks that the White House might add Dershowitz to its defense team, the other attorneys come as a relative surprise.

Trump was also said to be considering House GOP lawmakers as part of his team.

The Democrat-controlled House last month impeached Trump on charges of abuse of power and obstruction of Congress amid allegations he withheld security aid and a White House meeting for Ukraine to pressure the country to announce investigations that could benefit his reelection campaign. The vote came nearly along party lines, with no Republicans voting in favor of impeachment.

Trump has maintained he did nothing wrong and did not pressure Ukraine, describing his call with Ukraine’s president at the center of the House’s case as “perfect.” The White House has also accused House Democrats of a partisan effort to overturn the results of the 2016 election.

The Senate is scheduled to hold procedural votes for the trial on Tuesday. House impeachment managers will make opening arguments, followed by the White House defense team. The Senate, which is controlled by Republicans, is widely expect to acquit Trump.

The White House has been tight-lipped about the substance of what it will argue, though Trump’s defenders have largely maintained throughout the impeachment process that he was focused on corruption in Ukraine and had the power as chief executive to set foreign policy. Trump’s legal team is expected to submit a legal brief responding to the allegations sometime before Monday, which should offer more clues as to how the lawyers plan to argue the president’s case.

A senior administration official told reporters this week that they believe the impeachment case is so weak that the trial could be over within two weeks. However, a handful of Republican senators have indicated they are open to hearing witness testimony, which could extend the timeline and deliver additional evidence for and against Trump.