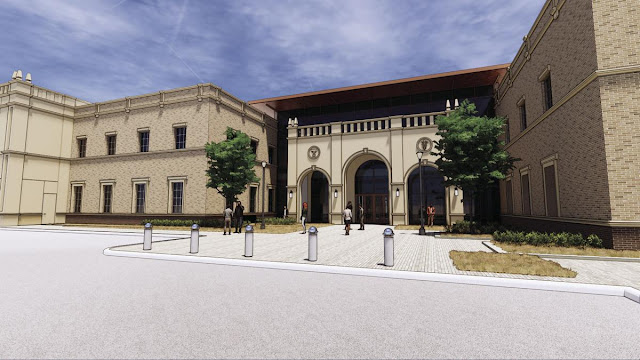 On Wednesday, the Texas Tech System Board of Regents approved the $90 million total project budget for the Tech School of Veterinary Medicine in Amarillo.

The board passed a motion to approve the acceptance of the Guaranteed Maximum Price (GMP) for the construction of Bid Package 2 for the vet school during a the meeting at 10 a.m. Wednesday at the Tech System Administration Building.

"But I also wanted to note the $970,000 there under professional services," he said. "That's really two things. One of those is commissioning, and the other one we're including funding for an on-site project management team. That's going to be in line with the new facilities rules that were adopted back in December by the board."

The process for determining the best option for the project management team will start today, Breedlove said.

"We are going to do basic landscaping with hopes to do a little bit more later as the budget allows," he said, "and the public art, we are exploring different types of fundraising opportunities that may tie into the public art piece."

The scope of services for the project consist of finishing 185,200 gross square feet for a two-story academic building and programs divided among two wings of the facility, Breedlove said.

Regarding the East Wing, Breedlove said there will be a tiered classroom to accommodate 400 students, two large classrooms, which can accommodate about 100 students each, break-out rooms, a Student Affairs office suite, Graduate Study and workrooms and faculty and staff offices with support spaces.

The West Wing will consist more of lab and research spaces, which will be separated by controlled access, Breedlove said. This wing will consist of student locker rooms, specialty labs, surgery suites and small animal housing.

"We have 20 additional labs designated for research," he said. "Also, 10 of those labs we're going to shell out for future development."

When starting the design process for the school, SVM Dean Guy Loneragan said they looked at other schools.

"We started with a feasibility study that went through and brought on a design team, and they brought on their consult, who has built vet schools in the country and around the world."

Regarding the design of the SVM, Loneragan said the building builds on some the best of the most recent vet schools in terms of the facility's design and curriculum going hand in hand.

"This building represents a set of facilities unlike any recent vet school has had," he said. "This is world-class facilities that offers a lot of efficiencies in the way it's designed."