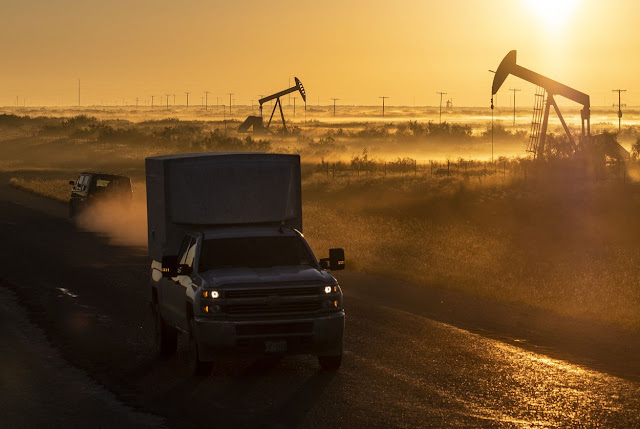 The oil and natural gas industry paid a record-setting $16.3 billion in taxes and royalties to local governments and the state in 2019, the Texas Oil and Gas Association announced Tuesday.

It is the highest sum since the 100-year-old association began tracking payments in 2007 — an indicator of the historic nature of the oil and gas boom that's gripped the state in recent years. The frenzy has driven U.S. fossil fuel production — and exports — to record levels.

But the announcement comes as the industry appears on the precipice of a major slowdown as high production rates, softened global demand and a host of other economic and political factors have shifted the calculus.

While fossil fuel production continued to rise in Texas in 2019, major cracks emerged in the latter half of the year: a significant drop in the number of active oil rigs, thousands of industry job losses and a spate of bankruptcies. Some analysts have said that already modest oil prices could drop below a key level of $50-per-barrel, which would deal a further blow.

Texas Oil and Gas Association President Todd Staples said on Tuesday to expect more of the same in 2020.

"With production strained by prices, we may have additional bankruptcies and mergers and acquisitions as companies work to maintain a competitive [advantage]," Staples said during a conference call with reporters. "Job growth may continue to lag further than we’ve enjoyed in recent years."

Aside from more industry-specific pressures, Staples said there's "no question the trade war with China has put a strain on U.S. natural gas producers." The announcement of a final trade deal, he said, was "welcome news."

Citing the tax and royalty figures released Tuesday, which are broken down in a report that emphasizes support for K-12 and higher education, Staples repeatedly emphasized that fossil fuel production, transport and processing remain a crucial factor in the state's economic well-being.

While the $16.3 billion in taxes and royalties the association reported paying to counties, school districts and the state of Texas is historic, it also is slightly inflated. In past analyses, the association has focused on 10 industrial sectors. This year, it chose to include four additional ones in its calculations — sand mining and pipeline construction among them — "to provide a more comprehensive view of the industry," Staples explained. That boosted contributions by half a billion dollars, up from $15.8 billion.

Still, the prior record of $15.7 billion was bested. That was set in 2014 when oil prices began to slip amid a fossil fuel glut that developed after nearly a decade of significant energy production, culminating in a devastating bust.

Facing another downturn means it's more important than ever to support the industry, Staples said Tuesday.

"We need to be doing all we can to maintain the stabilizing force that Texas has become for the world," he said.

That support, Staples said, should come in the form of promoting "science-based" regulations, pipeline construction, port expansions and resisting "political schemes that call for bans of the world’s most important asset" — an apparent reference to the controversial Green New Deal.

At the same time, Staples openly acknowledged that manmade climate change is a threat and said the industry is "absolutely committed to climate progress" — definitive comments that would have been unheard of just a few years ago. (National lobby groups have recently begun promoting the industry as a force for good in the climate change fight, though Staples said "everyone's independent" when asked if his association was taking a cue.)

"We believe that all emissions contribute to climate change and we believe that our industry is committed to doing our part to make improvements," he said.

The development of carbon capture and leak detection technologies and improvements in refining processes are all "areas where our member companies continue to be difference-makers and will lead to a lower-emissions future," he said.

Staples on Tuesday repeatedly contended that it's possible to achieve environmental goals while also growing the economy.

"No matter how much rhetoric we hear, there's no replacement for all the good that the oil and natural gas industry does for our lives today," he said.