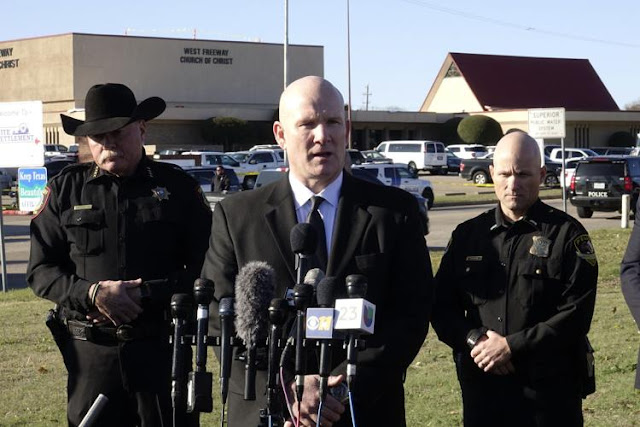 From roughly 50 feet away and with a single shot to the head, Jack Wilson – volunteer security officer at West Freeway Church of Christ and former FBI agent – prevented a potentially far worse mass shooting when he shot and killed a gunman who opened fire Sunday at the church, law enforcement says.

"The citizens who were inside that church undoubtedly saved 242 other parishioners,” Texas DPS Director Williams told reporters.

The gunman killed two before Wilson ended the attack.

Williams noted that concealed carry parishioners could react immediately to save lives compared to waiting for law enforcement to arrive despite their best efforts to improve response time.

“The brave officers from the White Settlement Police Department were on the scene in less than two minutes, but these men who had volunteered for the church security team had already secured their church,” Lt. Gov. Dan Patrick said.

A live recording of the service was taken down from the church’s YouTube channel but is being shared on social media. The video shows a gunman wearing black first speaking to a man in the corner of the church before he reached for his gun and began shooting.

“We lost two great men today, but it could have been a lot worse, and I am thankful our government has allowed us the opportunity to protect ourselves,” Britt Farmer, the church’s senior minister, said.

In September, a new state law went into effect allowing places of worship to have armed volunteer guards on site.

Pre-existing law allowed license-to-carry congregants to bring firearms into houses of worship but not within the function of performing security. To ensure the safety of their congregants, churches and other places of worship could budget to pay private security firms, or obtain a $400 "letter of authority" from the state to create volunteer security teams.

In 2017, a bill was signed into law exempting places of worship from paying the $400 fee.

"We’ve seen churches being targeted time and time again, and it doesn’t make sense that they can’t protect themselves without hiring private security, which a lot of small churches don’t have the funds to do," Republican State Rep. Matt Rinaldi, cosponsor of the new law, said.

Rinaldi introduced the House version of Senate Bill 535, sponsored by Republican state Sen. Dr. Donna Campbell. The bill clarifies the use of firearms in churches, synagogues or other places of worship.

"We have learned many times over that there is no such thing as a gun free zone,” Campbell said when introducing the bill. “Those with evil intentions will violate the law and carry out their heinous acts no matter what. It makes no sense to disarm the good guys and leave law-abiding citizens defenseless where violent offenders break the law to do great harm."

"The existing statute is confusing and clunky when it comes to clearly stating the rights of licensed Texans to carry on the premises of a church,” Campbell said. “This bill provides clarity of the Legislature's intent to treat churches in the same manner as other privately owned establishments in Texas."

The FBI said the gunman had been arrested in different jurisdictions but wouldn’t expand on any details.

Despite being hailed as a hero by the local community, Wilson told CBS Dallas Forth Worth News that he doesn’t consider himself a hero.