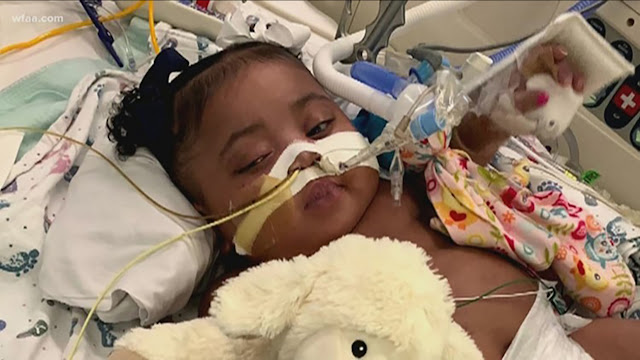 A Texas judge ruled Thursday that a Fort Worth hospital can remove an 11-month-old baby from life support, though the child's mother reportedly plans to appeal the decision.

Judge Sandee Bryan Marion of the Tarrant County district court sided with Cook Children’s Medical Center that Tinslee Lewis’s life-sustaining treatments should end after doctors said the infant is in pain and will not get better, The Associated Press reported.

Texas Right to Life has advocated for Trinity Lewis, Tinslee's mother, as she sought a temporary injunction. The group, which opposes abortion, said she will appeal the judge's decision.

“I feel frustrated because anyone in that courtroom would want more time just like I do if Tinslee were their baby,” Lewis said in a statement. “I hope that we can keep fighting through an appeal to protect Tinslee. She deserves the right to live.”

The hospital had planned to take Tinslee off life support on Nov. 10, after enforcing Texas's “10-day rule” that allows providers to stop treatment if the hospital’s ethics committee agrees with the doctors that care should cease, even if the family disagrees. Treatment can be ended after 10 days if a new provider can't be found to take on the patient.

Cook Children’s Medical Center officials said they contacted more than 20 facilities as potential new providers, but all of them declined.

"Today’s decision from Chief Justice Sandee B. Marion restores the ability of the Cook Children’s medical staff to make the most compassionate and medically appropriate decisions for Tinslee as she struggles in pain to survive each day," the hospital said in a statement. "This is an emotional and difficult situation for everyone involved, especially for this family who had high hopes that Tinslee would get better."

Tinslee was born prematurely and hasn’t left the hospital. She has a heart defect, chronic lung disease and severe chronic high blood pressure. She has used a ventilator since July and needs respiratory and cardiac support, deep sedation and medical paralyzation.

Both sides agreed that the hospital would wait at least seven days until discontinuing life support in order to give Trinity Lewis enough time to file an appeal and a motion for emergency relief.