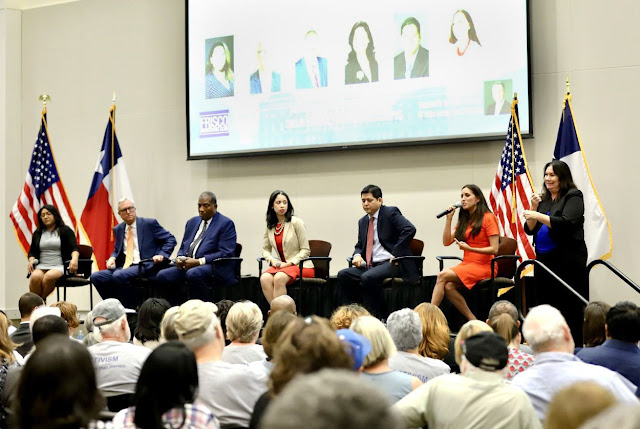 A bunch of Texas politicians will soon find out they are not destined for elected office. Not this time, anyway.

The Democratic and Republican primaries, the first round of the 2020 election cycle, loom. Early voting starts in just six weeks, on Feb. 18. Election day for the primaries is two weeks after that.

Dozens of candidates will learn sometime after sundown March 3 that this is not their year.

Some of this year’s primary races are absurdly crowded. It starts at the top, with all of those Democrats in the hunt for the presidential nomination. In the next race, a dozen Democrats are competing to face U.S. Sen. John Cornyn in November.

A total of 89 Republicans and Democrats are vying for six open seats in the state’s congressional delegation; only a dozen will move forward after the primaries and the May primary runoffs. Do the math on that: At most, only 12 people can move to the general election in those six races, which leaves 77 sitting on the couch, watching someone else getting elected in November.

But this is about the political year ahead — not just the losers-in-waiting.

That Senate race is important to both parties, and not just because both want the seat. Races for the U.S. House are next on the ballot. Republican incumbents in six of those decided not to seek reelection. Chances are that three of those will effectively be decided in the March primary, and three will be competitive when the herds are culled to just one Democrat and one Republican in each race.

State legislative seats are usually of interest only in Texas. But Democrats believe they might be able to win nine more seats in the Texas House, which would be enough to give them a majority. That’s mainly a state interest, because it would split the Legislature — the Senate is safely Republican — and force the GOP to negotiate with Democrats on issues like the state budget, public education, college tuition, social issues and so on. It would put a Democrat in the speaker’s chair for the first time since Pete Laney, D-Hale Center, lost his majority in the 2002 elections.

So far, that’s interesting but not essential to people outside of Texas. What turns those out-of-state heads? The political maps that the next Legislature will draw.

If the House and Senate can’t agree on maps for the Texas Legislature, a five-member Legislative Redistricting Board will step in to do it for them. That board will have at least four Republicans on it, all reelected in 2018: Lt. Gov. Dan Patrick, Attorney General Ken Paxton, Comptroller Glenn Hegar and Land Commissioner George P. Bush. The speaker of the House, whoever that is, will be in the fifth chair.

But a House-Senate split on maps for Congress skips that panel and goes straight to federal court. That’s a roll of the dice for both parties; the judges could be Republicans or Democrats. But for the Democrats, it’s a chance to take a sure thing from the Republicans, and at the moment, they’re talking like people who are willing to spend money on that possibility.

Elections aren’t the only show in 2020. It’s the year of the census, when Texas and other states count heads and begin divvying up everything from the seats in Congress (early estimates are that we’ll get three more seats on top of the 36 we have now) to resources for highways, health and human services, education, and many other programs on which the federal government spends money. Texans will find out this year whether the property tax “relief” passed by the 86th Legislature is actually relieving.

We’ll also find out what Congress does with the president’s impeachment, and what happens after that. It will set the table for the next round of legislative and congressional battles.

The first step is an election, and it’s going on right now.