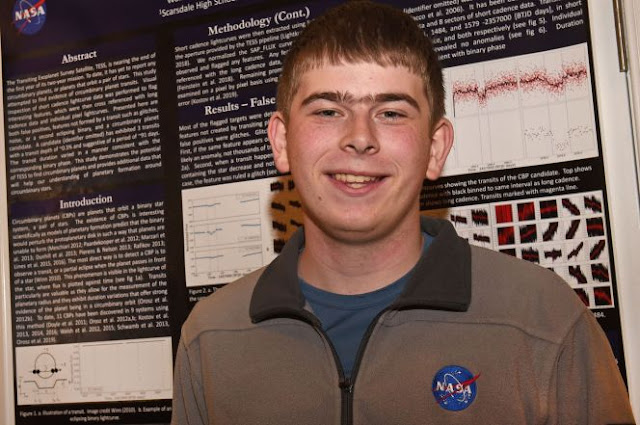 A New York teen who worked as an intern at NASA made a discovery last year while reviewing research data — a new planet.

Cukier, who is currently a senior at Scarsdale High School, was examining data from a foreign system 1,300 light-years from Earth. He discovered darkness in one of the system’s suns, which was actually a planet nearly 7 times larger than Earth that orbited two stars.

"I had a lot of data in my notes that day about extremities in the binaries," Cukier said of the discovery, which researchers call a “circumbinary planet.” "But when I saw this one, I put 10 asterisks next to it."

The discovery marks the first time the TESS program discovered a planet in the orbit of two different stars, ABC News reported. There are reportedly two suns in the solar system with the planet. One is 10 percent more massive than the Earth’s sun and the other is 30 percent of the sun’s mass, according to NASA.

“The idea is we have a telescope that happened to be pointing at these stars, and the planet passed between those stars, and our telescope. And just like when the moon eclipses the sun, it creates a dimming of light from those stars. What we did was, I noticed that dimming and that was evidence that something was there, and it happened to be a planet” he said.

Cukier joked that the planet doesn’t have “an interesting name, just TOI1338B.”

The teen said he spent weeks with his research mentors and other researchers confirming his finding, ABC News reported. NASA said the discovery was rare because circumbinary planets are usually only detectable when a sun shows a decrease in brightness.

Cukier told ABC News that "Our confidence went up and down a couple of times, but by the end of the internship, we were confident that what we found was a planet.”

The high school student’s work was featured this week at the 235th American Astronomical Society meeting in Hawaii. Cukier said he and his mentors are looking for a journal to publish their research, and he hopes to continue his astronomy research in the future.

"Future research would involve finding more planets," he said. "We don’t have a large sample size of binary system planets."