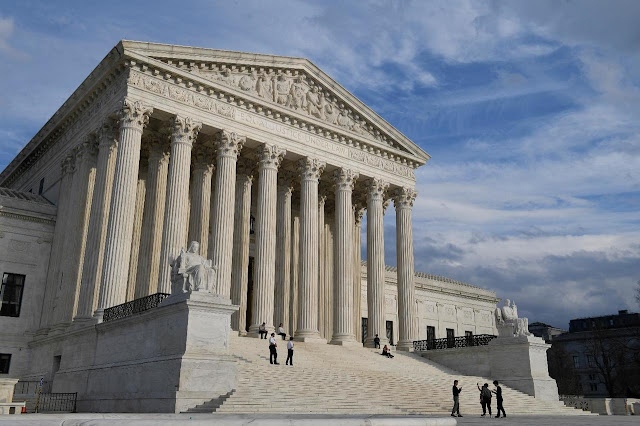 The Trump administration can move forward with a rule to make it harder for immigrants who rely on public assistance to gain legal status while a court challenge plays out, the Supreme Court ruled on Monday.

The Supreme Court voted 5-4 along ideological lines to lift a nationwide injunction on the proposal imposed by a federal judge in New York while the case is playing out in the 2nd Circuit Court of Appeals.

The rule, from the Department of Homeland Security (DHS), would make it easier for immigration officials to deny entry or legal status to people likely to rely on government assistance.

Under current regulations, the criteria for deciding if an immigrant would become a public charge is whether they are likely to rely on certain cash benefits. The new rule would expand that, defining public charge as someone who relies on cash and non-cash benefits such as housing or food assistance for more than 12 months in a three-year period.

The rule also allows immigrants to be declared a "public charge" and denied green cards even if they are employed.

New York Attorney General Letitia James said on Monday that she is still working to put a permanent end to the rule.

“Generations of immigrants have come to this country with little more than a dream in their pockets, but the president’s Public Charge Rule is an egregious attempt to infringe upon the values of our nation," James said in a statement. "We have already received a favorable decision in the district court and are continuing our fight against the Trump Administration in the Court of Appeals.”

“This decision will hurt immigrant communities," added Javier Valdés, an executive director of the immigrant group Make the Road New York, which brought a separate legal challenge against the rule.

"The Trump administration's public charge rules attack our loved ones and neighbors by imposing a racist wealth test on the immigration system," Valdés said. "We will continue our fight in the courts to stop this reckless policy in its tracks."

DHS issued the rule in October, prompting rapid legal challenges across the country. The nationwide injunction that was lifted Monday arose from a pair of lawsuits filed by New York state and aid groups.

James told the court last week that allowing the rule to be implemented while it is challenged in court would "inject confusion and uncertainty" into the immigration system that has relied on a drastically different reading of the law since the 19th century.

"There is no basis for such extraordinary intervention by this Court," James wrote in a court filing. "Defendants have not even attempted to identify any urgent need to radically disrupt the status quo that has lawfully governed public-charge determinations for over a century."

The Justice Department asked for the stay earlier this month, denouncing the fact that a single judge in New York was able to upend several appeals court rulings that have been issued across the country over the public charge rule by imposing a nationwide injunction.

Justice Neil Gorsuch issued a five-page concurring opinion with Monday's order arguing that such nationwide injunctions exceed the authority of federal judges and should be reviewed by the Supreme Court.

"The real problem here is the increasingly common practice of trial courts ordering relief that transcends the cases before them," Gorsuch wrote in the opinion, which was joined by Justice Clarence Thomas. "Whether framed as injunctions of ‘nationwide,’ ‘universal,’ or ‘cosmic’ scope, these orders share the same basic flaw — they direct how the defendant must act toward persons who are not parties to the case."