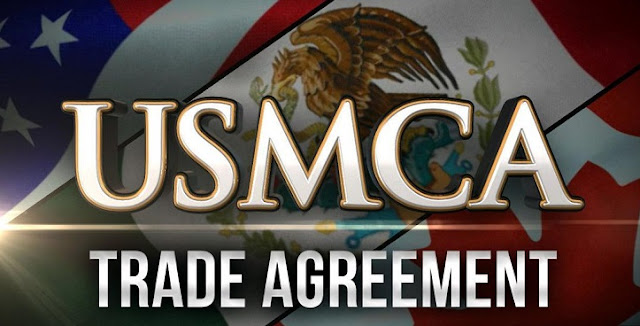 The Senate overwhelmingly passed a bill to implement President Trump’s proposed update to the North American Free Trade Agreement (NAFTA) after a mad dash to clear the measure before impeachment proceedings paralyze the chamber.

Senators voted 89 to 10 to pass a bill ratifying Trump’s U.S.-Mexico-Canada Agreement (USMCA), sending the measure to the president for his final sign-off. USMCA’s passage marks another milestone for Trump just one day after he cemented a preliminary trade deal with China.

“Today the Senate will send this landmark agreement to the president’s desk,” said Senate Majority Leader Mitch McConnell (R-Ky.) ahead of the vote. “Quite a week of substantive accomplishments for the nation, for the president, and for international trade."

All but one Republican and nine Democrats voted to approve USMCA. Democrats who voted against the agreement cited insufficient improvements to environmental standards.

“Despite the fact that it includes very good labor provisions, I am voting against USMCA because it does not address climate change, the greatest threat facing our planet,” said Senate Minority Leader Charles Schumer (D-N.Y.).

Trump is expected to sign the deal within days, though it will not take effect until Canada ratifies the agreement. The government of Mexico approved the deal last year and amended its labor laws to comply with stricter standards included in USMCA.

The Senate’s approval of USMCA checks off a key promise of Trump’s 2016 campaign that could help strengthen the president’s electoral prospects.

Trump’s pledge to rip-up NAFTA was crucial to his appeal in industrial states that lost thousands of jobs to Mexico under the 1994 pact. While USMCA is more of an update to NAFTA than a replacement, the still deal gives Trump an achievement to tout in Ohio, Michigan, Pennsylvania, and Wisconsin — four swing states that could make or break his reelection.

“I think there was a lot of skepticism, frankly, that we could come up with either one of these agreements,” said Sen. Rob Portman (R-Ohio) in a CNBC interview on Wednesday.

“We have done both of them, and shown that once again America can be out there helping to level the playing field and create a better environment for our workers and our farmers and get some deals done.”

USMCA’s passage may also serve as the high watermark of bipartisanship for Washington, and just days before the Senate begins Trump’s impeachment trial.

Many Democrats shared Trump’s skepticism of NAFTA and were eager to team with the president to revise the deal even as they sought to remove him from office. Trump also needed to secure enough Democratic support to clear USMCA through the House, where the GOP holds a minority.

House Speaker Nancy Pelosi (D-Calif.) and a team of Democratic negotiators secured major victories for the party in negotiations with Trump, including tougher labor, environmental and pharmaceutical standards.

Those changes helped win over some labor unions and Democrats fiercely opposed to free trade deals, including Sen. Sherrod Brown (D-Ohio), who has voted against every trade deal considered by Congress since 1993.

“[Trump’s] first NAFTA draft was nowhere near the good deal that the president promised. He had negotiated, pure and simple, another corporate trade deal, that meant nothing for workers,” Brown said Wednesday in remarks on the Senate floor.

But the new version of USMCA incorporated language from a bill offered by Brown and Sen. Ron Wyden (D-Ore.) to ensure foreign factories comply with labor standards under trade agreements, clinching his support.

The endorsements of Brown and a slew of powerful labor groups, including the AFL-CIO, helped rally progressive Democrats to behind the deal. The House approved USMCA on Dec. 19 by a vote of 385 to 41, just one day after approving two articles of impeachment against Trump.

Even some of Trump’s 2020 Democratic challengers, including Sens. Elizabeth Warren (Mass.), Amy Klobuchar (Minn.), and Michael Bennet (Colo.), voted for USMCA as a step to reduce the harm of NAFTA.

Republican critics of the deal complained that USMCA was rushed through the Senate less than a month after the White House unveiled changes to the agreement.

“It's very, very important to me that we insist that that delegated authority be exercised properly and the legislation that follows from it complies with the law,” said Sen. Pat Toomey (R-Pa.), who voted against the deal.

Despite their ideological differences over trade, few GOP senators were expected to buck Trump on a marquee trade issue. The president had also threatened to pull out of NAFTA altogether if Congress did not approve his replacement, threatening to unleash an economic calamity if lawmakers rebuked him.

Several also touted provisions in USMCA to reduce barriers for U.S. crop and dairy sales to Canada and Mexico, a victory for the agriculture industry.

“While not perfect, this deal represents a long overdue update to NAFTA, and overall will benefit workers and farmers in our state and across the country,” said Sen. Mitt Romney (R-Utah), touting the deal’s benefits for dairy farmers.

Trump has sought to make the strong economy and recent successes in trade talks a focal point of his campaign for a second term. The president is counting on a solid economic record to quash concerns about his conduct, character and rhetoric that could cost him swing voters.

Senators raced to approve USMCA before Trump’s impeachment trial, which would have blocked the chamber from voting on any other legislation.

The confluence of the House’s votes to impeach Trump and approve his most significant trade accomplishment threw USMCA’s future in doubt. A surprise ruling from the Senate parliamentarian set off a mad dash to approve USMCA in six committees other than the Finance panel, which has jurisdiction over trade.

But Pelosi’s initial refusal to send articles of impeachment to the Senate gave the upper chamber enough time to clear USMCA before Trump’s trial begins. The Senate is expected to swear in senators and initiate Trump's trial Tuesday.