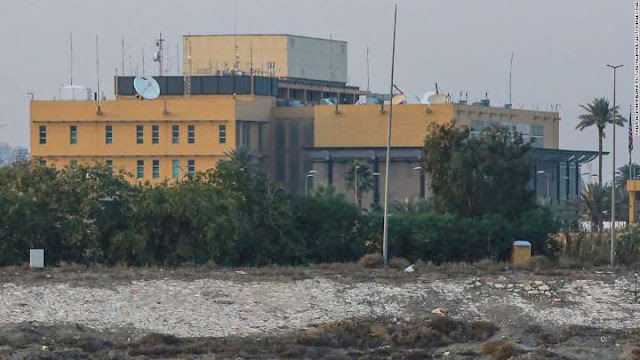 The U.S. Embassy in Baghdad was struck by at least one rocket on Sunday, though no casualties were reported, according to multiple reports.

Fox News and CNN reported that the rocket struck a dining area, which was at least partially burned by the blast. A U.S. official told Fox News that no injuries or deaths were reported and that all personnel were safe and accounted for.

The attack came as other rockets reportedly struck the side of a river in the city's Green Zone, also failing to cause any casualties or injuries, according to Fox.

Iraq's prime minister said in a statement that his government was "committed to protecting all diplomatic missions and taking all necessary measures to achieve this," according to CNN.

Tensions between the U.S. and Iranian-backed forces appeared to be simmering after an Iranian missile attack on two Iraqi bases housing U.S. troops caused minor damage and resulted in dozens of U.S. service members being airlifted to receive treatment for possible traumatic brain injuries.

The U.S. and Iran previously appeared to be on the brink of war after President Trump authorized a U.S. strike that killed Gen. Qassem Soleimani, the head of Iran's Quds Force, outside Baghdad's airport as he was in the country to meet with Iraqi officials.