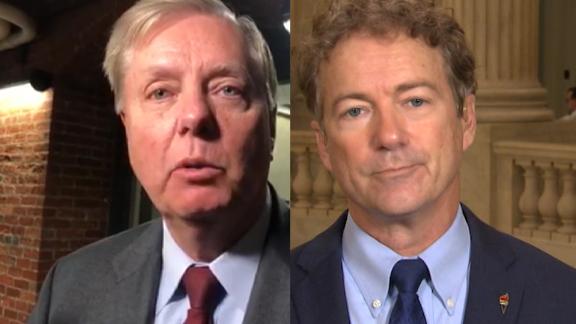 A high-profile debate over President Trump’s war powers is fueling a feud among Senate Republicans.

The fallout from a closed-door briefing on the U.S. air strike that killed Iranian Gen. Qassem Soleimani has put a spotlight on the divisions among two of President Trump’s biggest congressional allies: Sens. Rand Paul (R-Ky.) and Lindsey Graham (R-S.C.).

“If I had an eye problem, I would go to him. If I had a constitutional question, he would be the last guy I would pick,” Graham said on Thursday when asked about Paul, who is an ophthalmologist.

The two lawmakers are butting heads after Paul and Sen. Mike Lee (R-Utah) emerged from Wednesday’s classified briefing deeply critical of what they characterized as a warning from senior administration officials against debating Trump’s war authority and their use of a 2002 authorization as the basis for last week’s drone strike in Baghdad that killed Soleimani.

Appearing together before a gaggle of reporters and TV cameras, Lee called the presentation “the worst briefing I've seen, at least on a military issue."

Paul added that he found the briefing "less than satisfying" and that it was “absurd” and “insane” to use the 2002 Iraq war authorization as the basis for an air strike against an Iranian general.

"I see no way in the world you could logically argue that an authorization to have war with Saddam Hussein has anything to with having war with people currently in Iraq," Paul told reporters.

The anti-intervention stance aligns Paul and Lee with Trump’s 2016 campaign, when he consistently struck an isolationist tone and pledged to end the country’s “forever” wars.

But Paul and Lee are now at odds with most of their GOP colleagues on matters of military authority, making them outliers in the caucus. Most Senate Republicans hold views in line with the party’s foreign policy establishment, and Graham has in many ways taken over the mantle of top hawk following the death of Sen. John McCain (R-Ariz.).

Graham fired the opening shot Wednesday when he said he thought Paul and Lee were “overreacting” with their criticism of the administration's stance on the war powers debate.

“I'm going to let people know that at this moment in time to play this game with the War Powers Act ... whether you mean to or not, you're empowering the enemy,” Graham told reporters.

That prompted Paul, during a CNN interview, to argue that Graham hasn’t “even read the history of the Constitution.”

"He insults the Constitution, our Founding Fathers and what we do stand for in this republic by making light of it and accusing people of lacking patriotism. I think that's a low, gutter type of response," Paul said.

Paul has taken issue with Graham’s argument that Congress’ only way to rein in a president’s war powers is to defund the military conflict. Over the years, Paul has tried several times to sunset both the 2001 and 2002 authorizations for the use of military force.

It’s hardly the first time Paul and Graham have clashed.

In 2015, a clip of Graham went viral after he rolled his eyes at Paul on the Senate floor as the Kentucky Republican spoke during a debate over the Patriot Act. Paul, who was running for president at the time, fired off a fundraising email that labeled Graham and other surveillance-minded senators as members of the “eye roll caucus.”

Two years later, Paul called Graham a “warmonger” because the South Carolina senator couldn’t remember how many U.S. troops there were around the world.

“This is not about me. This is about one senator from South Carolina who so much objects to the Bill of Rights that he doesn’t want it to apply to people accused of a crime,” Paul said in 2018 as their fight held up the defense bill.

But there are signs that both camps are trying to paper over the rift that opened up this week.

Lee appeared to soften his criticism slightly, telling Breitbart, a conservative publication popular with Trump’s base, that the worst briefing he ever attended was during the Obama administration. Lee had specified Wednesday that the Iran briefing was the worst on military issues.

“The worst briefing I ever got in that room was on a slightly different issue back in 2012 right after the Benghazi attack, where we were told repeatedly by then-Secretary of State Hillary Clinton that the attack on the Benghazi consulate was based on a reaction to a video. So, fortunately, this was not that,” Lee said.

Graham also referred to Paul and Lee as “patriots,” before pivoting to stress that he thinks they are on the wrong side of the war powers fight.

“What I’ve been trying to convince Sen. Paul of, and I have failed miserably, is there is a delicate balance in the Constitution,” Graham said. “The constitutional founders never envisioned 535 commenders in chiefs. The ability to direct military forces is in the hands of the president of the United States.”