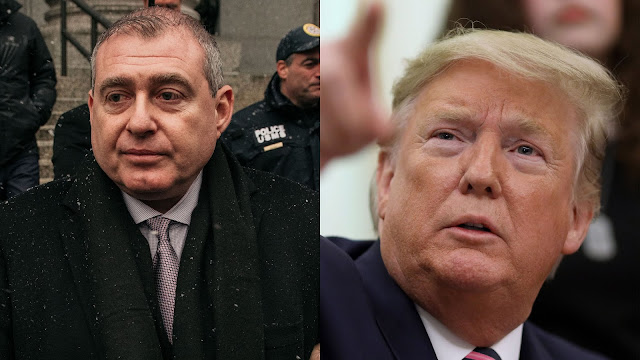 Pressure is growing on Senate Republicans to call Lev Parnas, an associate of President Trump’s personal lawyer Rudy Giuliani, to testify in the impeachment trial.

Democrats are opening the door to hearing from Parnas as a witness at the impeachment trial after an explosive round of media interviews and new evidence released by House Democrats, which details Parnas’s role in trying to convince the Ukrainian government to investigate former Vice President Joe Biden.

The revelations, Democrats argue, underscore the need for witnesses and documents — something Republicans have so far resisted.

Sen. Kamala Harris (Calif.) became the first Senate Democrat to call for Parnas to testify, telling MSNBC that the accusations levied by Parnas “should be pursued and should be reviewed” by the Senate.

“I think he should be brought before us so that we can determine his credibility. There are many ways to judge credibility,” Harris said.

“Mitch McConnell cannot be allowed to cover up the truth and protect Donald Trump. The Senate must hear directly from John Bolton, Mick Mulvaney, and Lev Parnas,” Markey tweeted.

Parnas has offered to testify, saying that along with former national security adviser John Bolton he could “fit in all the dots, I think, because I was on the ground there, and he was over here."

“Why aren't they calling me to testify? ... Call me. Ask me what Biden did wrong ... I think they're very afraid of me,” said Parnas, who has pleaded not guilty to campaign finance violations. He is reportedly looking to cooperate with prosecutors in his case.

Democrats released communications this week detailing Parnas conversations with Giuliani. The documents sparked a round of new questions days before the impeachment trial gets underway in earnest, including about whether Republicans were tracking former Ukraine Ambassador Marie Yovanovitch.

Parnas, since then, has engaged in a blitz of TV hits where he’s incriminated former Energy Secretary Rick Perry, Giuliani and President Trump.

“He was aware of all of my movements,” he said of Trump. “I wouldn’t do anything without the consent of Rudy Giuliani or the president.”

“All I can say is this: Republican senators who refuse to support the calling of fact witnesses and relevant documents should just resign for dereliction of duty under the Constitution,” he said.

The news dump comes amid a bumpy patch for the Trump administration. The Government Accountability Office (GAO) released a report on Friday accusing the White House of breaking the law with the decision to delay the Ukraine aid at the heart of the impeachment effort.

Parnas and Igor Fruman were arrested last year on allegations that they violated campaign finance laws in order to funnel money as part of a straw donor scheme to numerous Republican committees, including a $325,000 contribution in May 2018 to a pro-Trump super PAC called America First Action.

Democratic leadership and House impeachment managers aren’t ruling out trying to call Parnas as a witness. So far they have indicated they want to hear from Bolton, acting White House chief of staff Mick Mulvaney, Mulvaney's senior adviser Robert Blair and Michael Duffey, the associate director of national security at the Office of Management.

“As for Mr. Parnas, it’s something we wouldn't rule out, but we want to see all of the — evidently there are four sets of emails coming out and I'd want to wait to see those,” Senate Minority Leader Charles Schumer (D-N.Y.) told reporters during a press conference.

Sen. Dick Durbin (D-Ill.), Schumer’s No. 2, added that Parnas’s communications “make it clear that Rudy Giuliani was negotiating directly, trying to negotiate directly with the president of Ukraine, over this question of military aid and the investigation of the Biden family.”

House Intelligence Committee Chairman Adam Schiff (D-Calif.) said in a statement that they were reviewing “his interviews and the materials he has provided to evaluate his potential testimony in the Senate trial.”

The White House has sought to distance itself from Parnas's accusations. Trump said that he had never heard of Parnas, arguing that he takes “thousands and thousands of pictures with people.”

“I don't even know who this man is, other than I guess he attended fundraisers so I take a picture with him,” Trump told reporters.

Senate Republicans brushed off the revelations casting doubt on his credibility. If Democrats decided to try to call Parnas they would need four Republican senators to endorse calling him — so far none have.

Senate Judiciary Committee Chairman Lindsey Graham (R-S.C.) added that “I wouldn't trust him as far as I can throw him.”

Sen. Chris Murphy (D-Conn.) noted that while he wasn’t sure if Parnas is credible, his allegations do line up with other testimony from House impeachment inquiry witnesses including Gordon Sondland, the U.S. ambassador to the European Union.

“I don't know whether Parnas is credible. What I know is that every criminal conspiracy is unwound by prosecutors by going after the implementers, then ultimately give you information to go after the person who ordered it. So I don’t know if Parnas is credible, but everything he's saying has frankly been confirmed by other witnesses,” Murphy said.

“It is just an open and shut case to me that the president directed this scheme,” he added, “and Parnas’s testimony fits neatly with what we've already heard.”