Pelosi sending impeachment articles to the Senate next week 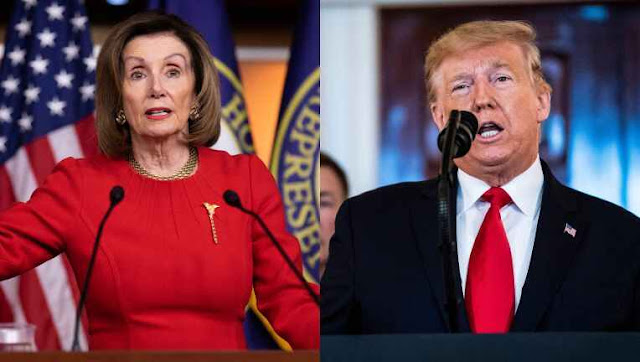 Speaker Nancy Pelosi (D-Calif.) said Friday that she expects to send the articles of impeachment against President Trump over to the Senate next week, breaking the standoff that had delayed the trial over his dealings with Ukraine.

The move, which came amid increasing pressure on the Speaker to drop her hold on the articles, means Democrats will move forward in appointing impeachment managers who will make their case that Trump committed high crimes and misdemeanors in Phase Two of the trial, which will weigh whether the president should be removed from office.

"I have asked Judiciary Committee Chairman Jerry Nadler [D-N.Y.] to be prepared to bring to the Floor next week a resolution to appoint managers and transmit articles of impeachment to the Senate," Pelosi wrote in a letter to Democrats.

"I will be consulting with you at our Tuesday House Democratic Caucus meeting on how we proceed further," she added.

The Senate trial could begin as early as Wednesday, according to Pelosi’s timeline.

The announcement comes more than three weeks after the House passed two articles of impeachment, largely along party lines, alleging that Trump abused his power while pressuring the Ukrainian government to investigate his political opponents and obstructed Congress in Democrats’ inquiry.

Shortly after Trump became the third U.S. president in history to be impeached, Pelosi said she planned to withhold the impeachment articles until she was sure Democrats would receive a fair trial, a condition she said included the ability to call in witnesses.

But Senate Majority Leader Mitch McConnell (R-Ky.) held firm in his stance that any decisions on witnesses should come after the Senate trial begins, in what he described as the same standard for former President Bill Clinton’s impeachment trial in 1999.

McConnell deflated much of Pelosi’s leverage earlier this week when he announced that he had enough votes within his GOP conference to vote to begin the trial without acceding to Democrats’ demands to commit to witness testimony first.

“A majority of this body has said definitively that we are not ceding our constitutional authority to the partisan designs of the Speaker. We will not let the House extend its precedent-breaking spree over here to our chamber,” he said on the Senate floor on Thursday.

McConnell also on Thursday signed onto a resolution from Sen. Josh Hawley (R-Mo.) that would change Senate rules and allow GOP senators to dismiss articles of impeachment before the House sends them over.

“Leader McConnell’s tactics are a clear indication of the fear that he and President Trump have regarding the facts of the President’s violations for which he was impeached,” Pelosi wrote in Friday’s letter.

The Speaker also faced calls among Democrats for her to end the deadlock, particularly in the Senate, and pass the two articles to the Senate.

Several Senate Democrats, including vulnerable Sens. Joe Manchin (W.Va.) and Jon Tester (Mont.), said earlier this week that it was time for Pelosi to send over the articles.

One of Pelosi’s home-state senators, Dianne Feinstein (D-Calif.), also said this week that “the longer it goes on, the less the urgency becomes.”

And on Thursday morning, House Armed Services Committee Chairman Adam Smith (D-Wash.) said on CNN that he believed it is “time to send the impeachment articles to the Senate.”

But in a sign of the power Pelosi wields over Democrats, Feinstein and Smith later reversed themselves and said that they deferred to the Speaker on how to proceed.

Still, just moments before the announcement, Pelosi dismissed reports of Democratic divisions over her impeachment strategy, characterizing them as false narratives manufactured by an obsessed media. She has, she said, "absolutely total cooperation" from within her caucus.

And Pelosi did reap from some new revelations while postponing the delivery of the articles, which she highlighted in her letter.

Former national security adviser John Bolton publicly announced Monday that he would be willing to testify if the GOP-controlled Senate subpoenaed him for testimony about what he witnessed.

His statement immediately sparked a renewed wave among Democrats — as well as some Republicans — saying they want to hear from the former senior official, particularly since Bolton is believed to have key insights on whether Trump withheld a White House meeting and nearly $400 million in U.S. aid in order to pressure Kyiv to open politically motivated investigations into former Vice President Joe Biden and his son, among others.

Senate Minority Leader Chuck Schumer (D-N.Y.) has also been calling for testimony from acting White House chief of staff Mick Mulvaney; Robert Blair, an adviser to Mulvaney; and Michael Duffey, associate director of national security programs at the Office of Management and Budget.

Pelosi and Schumer have pointed to a report from Just Security last week showing emails between Duffey and the Pentagon discussing the direction from Trump to hold the military aid to Ukraine, with one official questioning the legality of the delay.

But McConnell remained unswayed from the pressure, as Democrats called for the new witnesses and revelations to be examined in the Senate.

The episode between the two political powerhouses has also further revealed that both the House and Senate leaders had waded into the uncharted waters as it relates to impeachment under the Constitution, with both sides seeking to use the ambiguity of the law to their strategic advantage.

But the delay also foreshadowed what to expect in the coming weeks: Democrats attacking the Senate for holding an unfair trial, particularly McConnell for saying he would be in “total coordination” with the White House on every step.

Republicans allies of the president, meanwhile, will continue to blast the impeachment as a partisan sham designed to hurt Trump in an election year.

But some factors remain unclear as next week comes into focus.

Pelosi has not yet indicated which House lawmakers will serve as impeachment managers, who essentially act as prosecutors in a Senate trial.

But some of the names floated in recent weeks include top lawmakers involved in the impeachment inquiry, such as House Intelligence Committee Chairman Adam Schiff (D-Calif.), Judiciary Committee Chairman Jerry Nadler (D-N.Y.), and other members of their respective committees.

The expected timeline also means that a Senate impeachment trial is unlikely to conflict with the scheduled Democratic presidential debate on Tuesday night and force any candidates to remain in the Senate.

The five senators who are running for the Democratic presidential nomination — Elizabeth Warren (D-Mass.), Bernie Sanders (I-Vt.), Amy Klobuchar (D-Minn.), Michael Bennet (D-Colo.) and Cory Booker (D-N.J.) — will have to sideline any expected time on the campaign trail ahead of the Iowa caucuses on Feb. 3 once the impeachment trial begins.

The Senate will move swiftly to the trial once Pelosi sends over the articles. An impeachment trial will trigger a grueling Senate schedule with the chamber in session six days a week starting at 1 p.m., excluding Sundays.