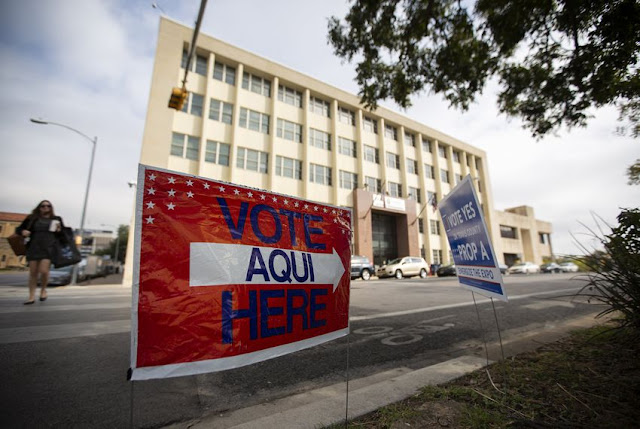 In a sign of the state’s flirtation with battleground status, Texas is being hit with a third voting rights lawsuit filed by national and Texas Democrats — this time targeting the state’s voter registration requirements.

In a federal lawsuit filed Monday in San Antonio, the Texas Democratic Party and the campaign arms for Democrats in the U.S. House and Senate allege that Texas is violating the U.S. Constitution and federal and state law by rejecting voter registration applications without an original signature.

The legal challenge springs from a 2018 electoral kerfuffle over the Texas Secretary of State’s rejection of more than 2,400 registration applications filled out by voters using Vote.org, a website run by a California nonprofit. That online application asked Texans to provide personal information and a picture of their signature to auto-populate a paper voter registration form that was then mailed to county registrars.

Days before a registration deadline that year, the secretary of state’s office indicated that applications submitted through the website should be considered invalid because they included electronic signatures, not physical ones.

In the lawsuit, the Democrats argue the secretary of state’s signature requirements are unconstitutional and impose “an arbitrary requirement that limits access to the franchise.” While the state allows eligible Texans to submit registration applications in person, by mail or by fax, Texas law “makes no reference” to requiring an original signature, they argue in the legal challenge.

Citing violations of the First and 14th Amendments and the federal Civil Rights Act, the state and national Democrats want a federal judge to block the state from enforcing the original signature rule and keep county registrars from rejecting voter registration applications.

“This unconstitutional ban does not make an ounce of sense, and it is the kind of arbitrary voter suppression that we’re working to tear down right now before even more harm is done to our Democracy,” U.S. Rep Cheri Bustos of Illinois, who chairs the Democratic Congressional Campaign Committee, said in a statement.

A spokesman for the secretary of state’s office did not immediately respond to a request for comment about the lawsuit. But in a 2018 statement on the issue, former Secretary of State Rolando Pablos pointed out that Texas doesn’t allow residents to register to vote online and warned against relying on “websites that misleadingly claim to assist voters in registering to vote online by simply submitting a digital signature.”

Texas’ Republican leadership has long shot down efforts to enact online voter registration in the state. As of October, Texas was one of 13 states that didn’t allow for online registration.

In suing the state, the Democrats pointed out that the secretary of state does allow for one kind of electronic signatures — those submitted on voter registration applications received through the Texas Department of Public Safety. That agency allows Texans obtaining or renewing a driver's license in person to enter their signatures on electronic keypads, which then may be used to populate voter registration applications. (Texas has been wrapped up in separate litigation for more than a year over claims it is violating federal law by not allowing voters who deal with their driver's licenses online to reregister to vote.)

Bolstered by Republicans' narrowing margins of victory and polls showing that Texas might be at least slipping from the GOP, Democrats have signaled they see voting rights litigation — and the voters that might be helped through it — as part of their longterm strategy in the state.

The voter registration lawsuit marks the third legal challenge by Texas Democrats and the Democratic Senatorial Campaign Committee and the Democratic Congressional Campaign Committee in recent months. The Democratic groups teamed up in October to challenge Texas’ move to effectively end the use of what were known as temporary or mobile early voting sites. A month later, they filed a lawsuit challenging a longstanding state statute that puts candidates who belong to the same political party as the governor at the top of general election ballots.