Jimmy Johnson is in the Hall of Fame, but not the Ring of Honor 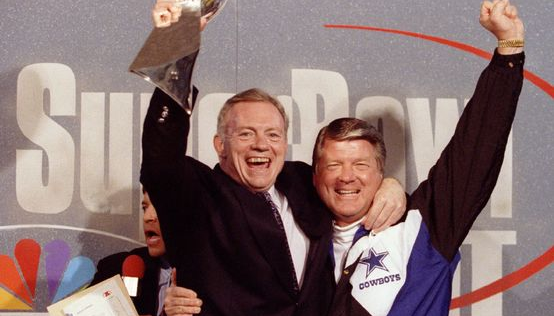 On Sunday evening, a great NFL injustice was corrected when the Pro Football Hall of Fame announced Jimmy Johnson as its 328th member.

When next fall hits we will all get to see Johnson and his hair molded into a bronze bust that will live forever in football’s most immortal fraternity. He deserves that and has for some time.

Why is Johnson so deserving? I likely don’t have to convince you, but he served as the architect for the Dallas Cowboys of the 1990s that ultimately won three Super Bowls in four seasons, two of which he presided over, and he drastically changed the way that talent was evaluated across the league as a whole. You cannot tell the story of the history of football without him which is why he belongs in the Hall of Fame.

That is generally used as a rubric to determine if people deserve enshrinement in Canton, Ohio. Could you tell the story of football without them? As mentioned, you can’t do so without Jimmy Johnson which means that you can’t tell the story of the Dallas Cowboys without him either.

Jimmy Johnson needs to be, and has needed to be, in the Ring of Honor

The funny thing about drawing parallels between the NFL as a whole and the Dallas Cowboys is that you can do it with the Pro Football Hall of Fame. The Dallas Cowboys, like every team, have their own miniature version of the Hall that they call the Ring of Honor. You’ve obviously seen the names that decorate the interior ring of AT&T Stadium and Texas Stadium before it.

Jimmy Johnson is now in the Pro Football Hall of Fame. He is not in the Dallas Cowboys Ring of Honor. That doesn’t make sense.

Think about it, the highest honor that someone associated with the game of football can achieve on an individual level is a bronze bust and gold jacket. Johnson has done that yet the Ring of Honor - which is 100% controlled by Jerry Jones - refuses to acknowledge him.

In fact, it is often a player’s absence from his team’s own Ring of Honor (or whatever each team calls it) that could be considered a factor that precludes someone from Canton; however, Johnson has obviously pushed through and a large part of that is due to this year’s Centennial Class that expanded to allow more members to finally get in.

Think about that, too. Jimmy Johnson did something that is very difficult and (not to take away from him at all) partly did so because of the extended class that the Pro Football Hall of Fame is having. All of this happened before Jerry Jones could make the individual decision to put him in the Ring of Honor.

Call it ego, call it whatever you want, Jerry Jones needs to put Jimmy Johnson in the Ring of Honor and he needs to do so as soon as possible. We now live in a world where he’s excluding a Hall of Famer from it which only adds to the ridiculousness of the reality.

Jimmy Johnson should have never had to wait this long to receive the nod for the Pro Football Hall of Fame. Thankfully he got what he deserved and will get to experience it. While the awkwardness of that happening before the Ring of Honor happening cannot be undone, the injustice of Johnson’s absence overall can.

Do the right thing, Jerry.