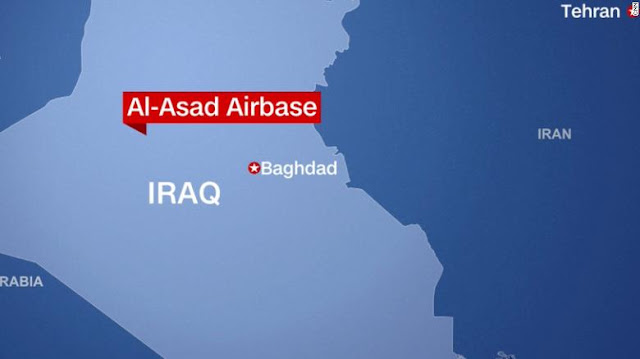 President Trump was briefed Tuesday evening after Iran claimed responsibility for the launch of missiles at an Iraqi military base housing U.S. troops, a marked escalation in the conflict between the two countries following the U.S.'s killing of a top Iranian general.

Pentagon spokesman Jonathan Hoffman said in the statement that the bases had been on high alert since the killing of Iranian Gen. Qassem Soleimani last week.

“We are aware of the reports of attacks on US facilities in Iraq,” White House press secretary Stephanie Grisham said in a statement. “The President has been briefed and is monitoring the situation closely and consulting with his national security team.”

Speaker Nancy Pelosi's (D-Calif) team also said it had been briefed on the matter, not long after Pelosi had met in the Capitol basement with the other members of the Gang of Eight for a briefing on the decision to launch the drone strike in Baghdad last week that killed Soleimani.

"We must ensure the safety of our servicemembers, including ending needless provocations from the Administration and demanding that Iran cease its violence," the Democratic leader tweeted Tuesday night, adding: "America & world cannot afford war."

Pelosi had huddled earlier Tuesday with members of the Democratic Steering Committee in another part of the Capitol, where she was handed a note about the latest strike on the base in Iraq. She then left the meeting to gavel open the floor ahead of Tuesday evening's votes and four minutes later spoke by phone with Vice President Pence, who briefed her on "the Iranian attacks on facilities housing U.S. troops in Iraq," according to spokesman Drew Hammell.

A spokesperson for Senate Minority Leader Charles Schumer (N.Y.) said the Democratic leader had also received a briefing from Pence by phone shortly after 6 p.m. on the strikes. "Leader Schumer is closely monitoring the situation and is praying for the safety of our service members and other personnel," the spokesperson added.

A spokesman for Pence said he has been "in continuous contact with the entire national security team" on the attacks and that he completed calls to congressional leaders at Trump's direction.

Tehran vowed it would retaliate after the Friday killing of Soleimani in a drone strike in Baghdad. Shortly after the killing, Iraq’s parliament took a nonbinding vote to expel U.S. troops, while Trump vowed that if Iran retaliated, the U.S. would target sites of cultural significance to Iran before appearing to walk back the threat Tuesday.

Trump signaled earlier Tuesday that the U.S. would respond "strongly" to a retaliation by Iran. “If Iran does anything they shouldn’t be doing, they’re going to be suffering the consequences and very strongly,” Trump told reporters during an Oval Office meeting with the Greek prime minister.

Saeed Jalili, who previously served as a nuclear negotiator for Tehran, tweeted an image of the Iranian flag as the report came in, an apparent reference to Trump's tweet of an image of the American flag shortly after the killing of Soleimani.