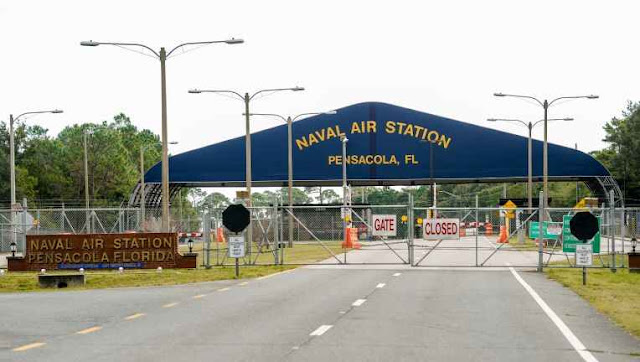 Attorney General William Barr announced Monday that a December shooting at a Pensacola, Fla., military base that left three dead was an "act of terrorism" and that the shooter was motivated by "jihadist ideology."

Barr made the comments while delivering the results from a monthlong investigation into the attack, which was carried out by a member of the Royal Saudi Air Force who had enrolled in the Naval Air Station Pensacola training program.

Barr said that Lt. Mohammed Saeed Alshamrani killed three U.S. sailors and wounded eight others after entering the grounds of the Naval station on Dec. 6. Alshamrani was shot and killed by police amid the massacre.

"The evidence shows that the shooter was motivated by jihadist ideology," Barr said, noting the gunman's social media use. "During the course of the investigation, we learned that the shooter posted a message on social media on Sept. 11 of last year that said: 'the countdown has begun.' Over Thanksgiving weekend, he visited the 9/11 Memorial in New York City. He also posted other anti-American, anti-Israeli, and jihadi messages on social media, and did so two hours before his attack at the naval base."

The investigation found no evidence that other members of the Saudi military had knowledge of Alshamrani's intentions. But Barr said Saudi Arabia determined that 21 military members training in the U.S. would be unenrolled and returned home over other revelations produced by the probe.

Barr said that 17 of those individuals had social media accounts that included jihadi or anti-American sentiments. He added that 15 also had "some kind of contact" with child pornography and that Saudi Arabia found these discoveries "unbecoming" of an officer in its military.

Independent U.S. attorney's offices determined that none of the cases involving other Saudi military members would warrant federal prosecution, he added.

The gunman reportedly used a legally purchased 9mm handgun while carrying out the attack at the Pensacola naval station. Barr noted that he had carried two Apple iPhones during the attack and that he had managed to shoot a single round into one of the devices amid a gunfight with first responders. He said the other phone was damaged, but both were "operational" thanks to work from the FBI crime lab.

In an unusual plea to a tech company, Barr called on Apple to help investigators unlock the shooter's phones, saying that it was important for investigators to "know with whom and about what the shooter was communicating before he died."

"This situation perfectly illustrates why it is critical that investigators be able to get access to digital evidence once they have obtained a court order based on probable cause," he said, noting that Apple had yet to give any substantive assistance. "We call on Apple and other technology companies to help us find a solution so that we can better protect the lives of Americans and prevent future attacks."

Apple told The Washington Post in a statement that it had assisted an FBI investigation by providing relevant data in its cloud storage.

The December shooting led to significant scrutiny from lawmakers over the vetting process for foreign nationals training on U.S. military grounds. Trump, who has received criticism over his relationship with Saudi Arabia, spoke with King Salman by phone shortly after the rampage, calling it a "horrible thing that took place."