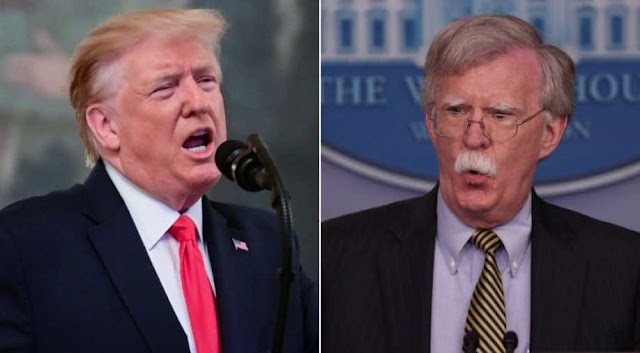 Former national security adviser John Bolton reportedly claims in his as yet unpublished memoir that President Trump sought to tie hundreds of millions of dollars in aid to Ukraine to his requests for the country's leaders to investigate former Vice President Joe Biden and his son Hunter Biden.

Multiple sources familiar with Bolton's book told The New York Times that he writes that President Trump personally told him that $391 million in aid to Ukraine should be frozen until Ukrainian officials announced the investigations, including one into the Democratic National Committee.

The book, which does not have a publication date as of yet, has been submitted to the White House for review. White House officials did not immediately return a request for comment from The Hill on the report.

An attorney for President Trump, Rudy Giuliani, responded in a statement obtained by ABC News: "I used to like and respect John, and tell people they were wrong about how irresponsible he was. I was wrong."

"He never once expressed concern to me. If he had confronted me, I could have explained it to him.....He wasn’t man enough to just ask and instead makes false and irresponsible barges to write a book about his failed career."

The report comes as the Senate has debated for days over whether to allow witnesses in Trump's ongoing impeachment trial beyond those who spoke to House investigators in past months.

"John Bolton has the evidence," he tweeted. "It’s up to four Senate Republicans to ensure that John Bolton, Mick Mulvaney, and the others with direct knowledge of President Trump’s actions testify in the Senate trial."

Bolton's lawyer confirmed the authenticity of the Times's report in a tweet, writing that he regretted that excerpts had been leaked during the classification and review process.

Bolton left the White House last year, with the president and his former aide disagreeing publicly at the time over whether he had been fired or resigned. The claim in his upcoming book revealed Sunday directly contradicts statements from Trump and other administration officials who have denied that aid to Ukraine was ever tied to the president's efforts to convince Ukraine's president to open investigations.