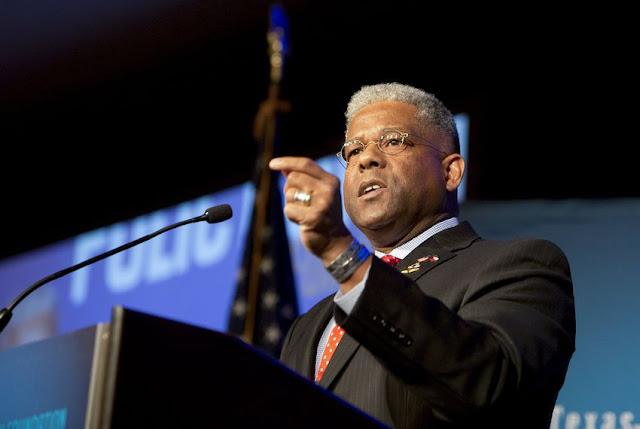 For months, the race for Texas GOP chair has been in full swing, with incumbent James Dickey and his high-profile challenger, Allen West, appearing at a slew of at times feisty forums.

But it was not until last week that the two had to disclose their campaign finances for the first time — and West's report brought something of a bombshell: Not only did the former Florida congressman raise nearly half a million dollars — a large amount for such an election — but $250,000 of it came from a single person. That person: Richard Uihlein, the conservative megadonor and shipping supplies magnate from Illinois.

In recent election cycles, the reclusive Uihlein and his wife Liz have become known for bankrolling insurgent conservative candidates across the country, sometimes serving as their primary patrons. Richard Uihlein gave $37.7 million to outside spending groups during the 2018 cycle, making him the fourth biggest donor to such entities and putting him in the ranks of people like Sheldon Adelson and Michael Bloomberg, according to the Center for Responsive Politics.

For now, it is not entirely clear why Uihlein has taken such an interest in the race to lead the Texas GOP — a job that entails keeping it well-funded and organized ahead of a crucial November election for state Republicans. West's campaign did not respond to questions for this story, and Uihlein himself has not responded to a message left with his Pleasant Prairie, Wisconsin-based company, Uline.

Dickey's supporters argue that his focus has been on raising money for the state party and positioning it strongly for the 2020 election, not financing his reelection campaign. They also have criticized West's spending as wasteful, pointing to expenses like a $424 payment to a limo service for a ride from the Buc-ee's gas station in Madisonville to Garland, a roughly two-and-a-half-hour drive.

West has made his fundraising chops part of his pitch to chair the state party, often noting the big bucks he was able to raise as a congressman who built a national following. Some of Uihlein's Florida-based relatives were donors to West's campaigns there.

The election for Texas GOP chair will be decided by delegates to the state party convention, which is set for mid-May in Houston.

Dickey, the former chairman of the Travis County party, is not unfamiliar with hard-fought chair races. He first ascended to the position in 2017 by a margin of one vote on the State Republican Executive Committee, and he won reelection the next year after a long and nasty fight on the convention floor. His challenger that time, Cindy Asche, was also well-funded, having loaned herself almost $200,000.

But West's money may pose Dickey's most serious threat yet, in no small part due to Uihlein's generosity — which is not always limited to a single six-figure check if his giving history is any indication. West's strong fundraising has helped allow him to already air TV ads — an unusual move in a state party chair race normally characterized by more direct delegate outreach, let alone months before delegates make their decision.

West is currently in the middle of a $40,000-plus buy on cable TV in the Dallas-Fort Worth and Houston areas, according to the ad-tracking company Medium Buying. West is airing both 30- and 60-second commercials as part of the roughly six-week buy.

West's campaign has not confirmed details about the buy or provided the ads that it's airing, but there are several 30- and 60-second spots posted on his Facebook page. In the commercials, West encourages Republicans to register to vote in time for the March 3 primary, among other things. None of the ads explicitly pitch his candidacy for Texas GOP chair, though he directs viewers to his campaign website at the end.

Uihlein is not a prolific donor at the state level in Texas — his only other significant contribution in recent years was $10,000 to Greg Abbott while the governor was running for reelection in 2018. But Uihlein is no stranger to some of the state's federal officeholders — most notably U.S. Sen. Ted Cruz, who has benefitted from Uihlein's largesse through multiple election cycles. Most recently, Uihlein gave $450,000 to Texans Are, a super PAC that supported Cruz's reelection last year.

Of course, Dickey has his own relationships with big donors as state party chair. One of them, Kathaleen Wall, is paying his first-of-its-kind $150,000 salary through the 2020 convention.

That is when thousands of delegates will get to decide whether to keep Dickey as chair or go with West several months out from a high-stakes election. During a forum Saturday in Tyler, Dickey raised that timeline while touting the party's growth under his leadership, saying it is "absolutely critical that five months before the election ... we do not try to change courses and try to mess up what has instead been an excellent team-building over a couple years."

In his closing statement, West suggested Texas Republicans should think bigger, particularly when it comes to fundraising.

"I applaud the chairman for raising three to four million dollars, but let me tell you something," West said. "I remember being a congressman and coming to Dallas to raise money for my congressional race back in Florida. The state of Texas should have 10 to 15 million dollars in its coffers for the Republican Party."