Bernie vs Elizabeth: The great progressive showdown that wasn't 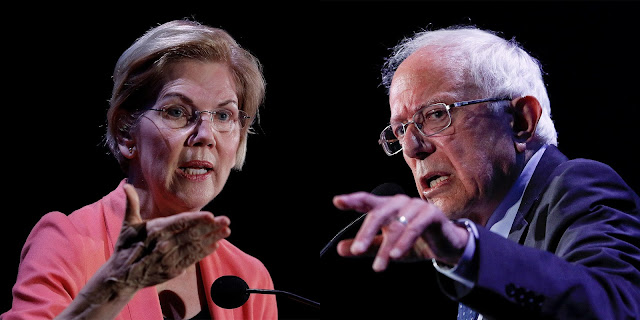 We had 48 hours of buildup to the great progressive presidential candidate showdown, and then both contenders threw away their shots. About 30 minutes into tonight’s debate, we finally got the long-awaited Bernie Sanders–Elizabeth Warren showdown . . . but clearly, both candidates lost their nerve and didn’t see much benefit from a sustained head-on confrontation.

Sanders offered a rather vehement denial that he had told Warren in private conversation that a woman couldn’t defeat Donald Trump. “How could anybody in a million years not believe that a woman could not be president of the United States?”

But after Sanders offered his emphatic disavowal, moderator Abby Phillip bizarrely asked Warren how she felt when Sanders said it – implicitly assuming in her question that Sanders had indeed said it! The right question in that situation was, “Senator Warren, did Senator Sanders just lie?

Warren began with a disingenuous declaration that “Bernie is my friend and I’m not here to fight with Bernie.” Then she said, “Look at the men on this stage. Collectively, they have lost 10 elections. The only people on this stage who have won every single election that they’ve been in are the women, Amy and me!” Warren’s not quite right. Amy Klobuchar actually withdrew from a race to be Hennepin County attorney in 1994. Klobuchar won the county-attorney election four years later, and was reelected with no opposition in 2002. She won Senate elections in heavily Democratic Minnesota in 2006, 2012, and 2018.

Keep in mind, Warren has run in two elections in her life, both as a Democrat in Massachusetts. Warren keeps insisting that nobody thought that anyone could beat Scott Brown.

Then the pair got into an odd semantic argument over Warren’s boast that she was the only candidate on stage to defeat an incumbent Republican in the past 30 years. (Brown, when Barack Obama was running for reelection atop the ticket in 2012.) Sanders corrected her, pointing out that back in 1990, he beat an incumbent GOP congressman. (With some key help from the NRA, as I wrote earlier this week.) Is 1990 within the past 30 years? Does it matter if the number is 29 years and not 30? Keep in mind, during that time, Biden, Klobuchar, and Buttigieg never took on an incumbent Republican and Tom Steyer’s never run for anything else in his life.

Democratic voters seem extremely focused on seeing Trump leave office on January 20, 2021, and not quite so focused on what happens on January 21. Between this cycle and 2016, we’ve watched 16 debates featuring the Vermont senator. In Bernie Sanders’s world, the American people face no problems that are truly thorny and complicated and involve trade-offs. In Sanders’s narrative, the root of every problem is that “we” haven’t “stood up” enough to somebody powerful – big multinational corporations, big banks, big oil, big pharmaceutical companies. And apparently once we “stand up” to these powerful forces, the problems will just get solved. He envisions repeating the sweeping legislative legacy of Lyndon Johnson but has none of the deal-making or persuasive powers LBJ demonstrated. President Sanders would be rudely surprised to learn that one of his most difficult obstacles would be centrist Democratic lawmakers who aren’t on board for the whole socialist revolution. The state of Vermont – politically controlled by well-meaning progressive Democrats — crashed and burned when it tried to enact single payer, and nobody on that stage wants to even acknowledge it.

Watching Joe Biden tonight, I realized why his not-so-great debate performances over the past year haven’t damaged his standing in the polls much. Everybody already knows what they think of Biden, Democrats by and large like him, and it would take something really dramatic to get them to change their mind about him. Their opinion about Biden was written in cement that dried sometime in Obama’s first term. Month after month, he turns in debate performances that are shaky here and there, but overall okay or good enough, and surprisingly, few others on the stage take big swings at him.

For the last debate before people start voting, this debate was pretty mild, with few metaphorical punches thrown. Biden, Sanders, Warren and Pete Buttigieg all have a shot at winning Iowa and New Hampshire. Maybe all of the Big Four feel good about where they are, and don’t feel like taking any big chances. If anybody on that stage needed to make a splash, it was Klobuchar, and we got . . . more of the same. This was not the kind of performance that will double her support and get her some delegates.

People like me who kept complaining about having ten candidates on stage finally got our wish. Still, Steyer remains an absolute waste of space, a billionaire who’s signed up for some sort of presidential-candidate fantasy camp, where he gets to experience what the real candidates do. He kept saying dumb things like, “I just want to emphasize what Bernie Sanders said.” You don’t have to, Mr. Steyer. Sanders just said it so that you don’t have to say it. If you have nothing else to add, why are you up on stage?