Trump to Macron: 'Would you like some nice ISIS fighters?' 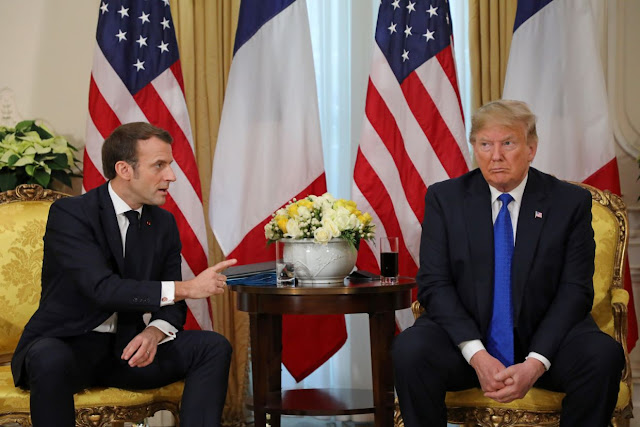 President Trump and French President Emmanuel Macron held a tense meeting Tuesday on the sidelines of a NATO summit, with Trump at one point telling the French leader he could send him some "ISIS fighters" if he wanted them.

“Would you like some nice ISIS fighters? I can give them to you,” Trump said with a slight smile at the meeting, which was carried live on cable news. “You can take every one you want.”

“Let’s be serious,” Macron replied sternly, reasoning that most ISIS fighters came from Syria, Iraq and Iran and disputing Trump’s common refrain that the terrorist group had been defeated.

Trump has complained that European countries have been unwilling to accept ISIS fighters the U.S. had captured.

The French president insisted that the number of European ISIS fighters was a “tiny” part of the overall problem of addressing destabilization in the region. He was also adamant that the terrorist group had not entirely been defeated, a break with a common declaration from Trump.

“I think [the] number one priority, because it’s not finished, is it to get rid of ISIS,” Macron said.

“That was one of the greatest non-answers I ever heard,” Trump said after Macron had concluded. “And that’s OK.”

If the meeting was tense, the days leading up the the one-on-one session were equally so.

The Trump administration a day before the meeting announced it was prepared to impose 100 percent tariffs on wine and other products from France in response to complaints about a French tax that has hit U.S. technology companies.

A myriad of disagreements between the two leaders played out in public over the course of the 40-minute meeting, which came hours after Trump called Macron’s comments critical of NATO “insulting.” The icy tone was a far cry from the warm embraces and state visit the two men have shared over the past two years.

Trump emphasized his “very good relationship” with Turkish President Recep Tayyip Erdoğan after Macron noted disagreements between Turkey and the rest of the alliance on their definition of terrorism.

Macron interjected shortly thereafter: “We have lost cooperation with Turkey.”

The French president demanded “clarification” from Ankara on how it could be a member of the NATO alliance and also purchase Russian S-400 missile systems amid NATO opposition. Macron also said Turkey wanted to “blow up” the summit if the other alliance members did not recognize Ankara’s view of groups that are terrorists.

When Trump suggested that his predecessor, President Obama, pushed Turkey toward purchasing the Russian missiles by refusing to sell Ankara the Patriot missile, Macron shot back, saying it was Turkey’s “own decision” to purchase the missiles after Europe offered another option that was compliant with NATO.

Trump was non-committal on reaching a deal to avert U.S. tariffs set to be imposed on $2.4 billion in French imports. He expressed frustration with the French tax, which he sees as targeting U.S. companies.

Tuesday’s icy meeting underscored the evolution of the Trump-Macron relationship.

The two men came into office within months of each other and enjoyed a close relationship. The two famously shared a lengthy and intense handshake at one of their first meetings, and Trump later hosted Macron at the White House for a state visit.

But Macron has become more outspoken as he seeks to take the mantle in Europe in the face of changing governments there and Trump’s unpredictability.

On Tuesday, the French president stood by his controversial comments about NATO, Macron said he was a supporter of a stronger European component in the alliance and agreed with Trump that the U.S. was overinvested compared to other countries, but he said there was more to the alliance than discussions about money and burden sharing.

“When you speak about NATO, it’s not just about money,” Macron said. “We have to be clear on the fundamentals of what NATO should be.”