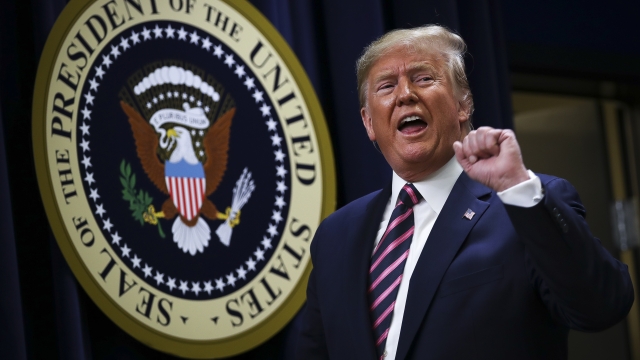 The bills included all 12 annual appropriations bills for the 2020 fiscal year that started Oct. 1. They also included a slew of tax cuts, extending expiring and expired tax breaks and eliminating other taxes that amount to an additional $426 billion in lost revenue, bringing the total cost of the bill to more than $1.8 trillion.

The government spent the first quarter of the fiscal year operating on stopgap funding that was set to expire on Friday. Trump reportedly signed the bill while aboard Air Force One en route to Mar-a-Lago for the holidays.

Trump’s signature brings to a close a fraught year for spending. At the same time last year, his refusal to sign a stopgap measure over funding his proposed border wall led to a 35-day shutdown, the longest in the nation’s history.

The Democratic majority in the House, which was seated in the midst of the shutdown, left Trump with little to show for the shutdown by way of wall funding. After finally striking a deal to reopen the government in February, Trump proceeded to declare a state of emergency along the Southern border to allow him to reprogram other funds.

Not long after, Trump released his annual budget proposal that would have hyper-charged military spending while dramatically cutting domestic spending, slashing more than 20 percent of funds from the EPA, State Department, and Transportation Department, and abolishing funding for popular programs such as the National Endowment for the Arts, the Corporation for Public Broadcasting and the Special Olympics.

Congress summarily dismissed the request and ultimately agreed to a deal that would increase spending on both defense and non-defense significantly for both 2020 and 2021. Congressional leaders would need two stopgap measures spanning nearly three months to work out spending allocations, find compromises on controversial issues such as the wall and agree on additional legislation to include in the package.

In the current spending package, one of the attached bills raises the legal age to purchase tobacco products from 18 to 21. Another expands the scope of and access to 401(k) retirement accounts.

Congress also agreed to scrap three taxes intended to pay for Obamacare. Eliminating those three taxes alone will add $373 billion to the deficit over a decade, the lion’s share of the bills’ lost revenue. Negotiators extended energy credits for biofuels and wind power, but not for solar or electric car manufacturers.

Trump, who vowed last March to never again sign a massive omnibus spending package, took umbrage in the fact that the spending was divided among two separate bills and played up Republican wins.

Democrats and Republicans in Congress agreed to split their differences on equally controversial issues such as the number of immigration detention beds by leaving those static. They also deferred to courts on whether Trump’s use of emergency powers to reprogram billions in defense funds toward building the wall was legal.

Thus far, the courts have ruled against Trump, but appeals are moving ahead.

The bills did not refill $3.6 billion from military construction programs Trump transferred to the wall.

“Finally, we have secured the funds and resources for our military — our national security,” said Shelby, who also heads the appropriations subcommittee on defense.

“This package includes a significant increase in defense funding and the largest pay raise in a decade for our men and women in uniform,” he added.

All in all, the bills raised defense spending by $22 billion.

Democrats claimed major victories in the bills as well, such as $25 million to fund research into gun violence, the first such funding in 20 years, $425 million for election security, increased funding for climate research and full funding for the 2020 census. They included a 3.1 percent pay increase for federal workers, matching the raise for members of the military.

“I am particularly proud that House Democrats prevailed in securing historic investments For the People, including record funding levels for Head Start and lifesaving medical research at NIH, and in funding priorities vital to our shared security, like gun violence prevention research and election security grants to states,” said House Appropriations Chairwoman Nita Lowey

House Majority Leader Steny Hoyer has said he hopes next year’s process will go more smoothly, and that all the bills will be passed by the Sept. 30 deadline, a rare feat.

Caps have already been agreed to for 2021, which could smooth the process.

But skeptics, including Shelby, note that there is unlikely to be big action ahead of a presidential election in November, and another “Christmas tree” bill in December may be in store.