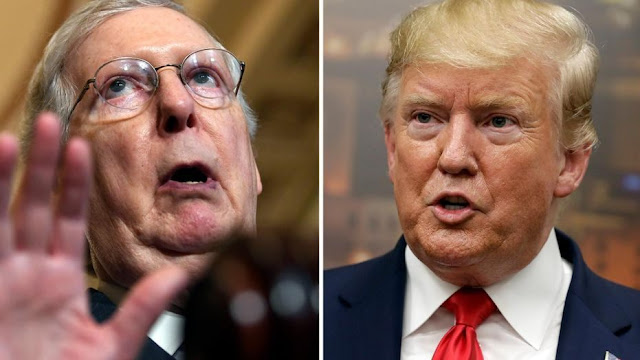 President Donald Trump said he’s in a “very good position” in advance of an impeachment trial in the Republican-led Senate, and that Majority Leader Mitch McConnell can do “whatever he wants.”

“We have the majority,” Trump told reporters on Tuesday at his Mar-a-Lago resort in Palm Beach, Florida. “And it’s up to Mitch McConnell.” He praised the Kentucky Republican as a “very good guy and a very fair guy.”

The Democratic-controlled House adopted two articles of impeachment against Trump Wednesday following an investigation into allegations that the president withheld military aid from Ukraine in an effort to extract politically damaging information about a domestic political rival, former Vice President Joe Biden.

House Speaker Nancy Pelosi delayed sending the articles to the Senate in an attempt to pressure McConnell, who wants a quick trial, to allow witnesses. Many House Democrats fear the Senate will swiftly move to acquit the president without examining evidence. Trump’s acquittal in the Republican-majority Senate is all but assured.

McConnell, Pelosi and Senate Minority Leader Chuck Schumer have been wrangling over the contours of a Senate trial, its length and whether witnesses will be called.

“They treated us very unfairly and now they want fairness in the Senate,” Trump said of House Democrats.

Trump attacked Pelosi as “desperate” and said “she hates all of the people that voted for me and the Republican party.”

After the House impeachment vote, Pelosi said she had “a spring in my step” because of the House’s moral courage. Pelosi and her caucus have argued that the chamber’s impeachment effort transcended the usual partisan conflicts that have paralyzed the Capitol.