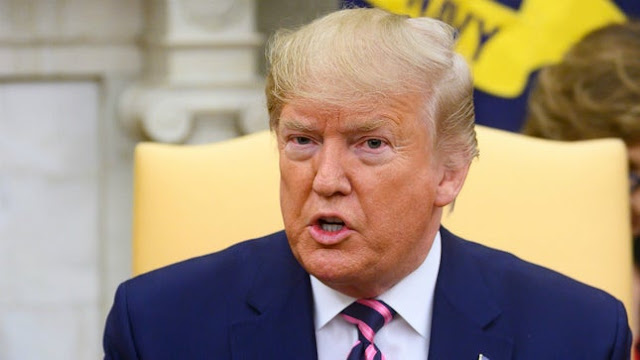 President Trump on Friday said House Democrats are “trivializing impeachment” after a House committee voted along party lines to approve articles of impeachment against him over his dealings with Ukraine.

Trump hammered the House impeachment inquiry as a “hoax” and a “sham,” claiming Democrats are trying to remove him from office for “political gain” and that the American people are “disgusted.”

Trump’s remarks represented his first reaction to the House Judiciary Committee voting along party lines Friday morning to approve two articles of impeachment against him.

The full House is poised to vote on the articles next week before recessing for the rest of the year. The articles accuse Trump of abusing his office and obstructing Congress in his dealings with Ukraine.

At the center of the inquiry is a July 25 call during which Trump asked Ukrainian President Volodymyr Zelensky to investigate former Vice President Joe Biden — his potential 2020 Democratic opponent — and his son Hunter Biden's business dealings in Ukraine.

Trump has defended his call with Zelensky, saying it was “perfect” and noting Ukraine’s president said publicly he felt no pressure from Trump, which he repeated on Friday.

The Judiciary panel vote on Friday was the culmination of days of partisan fighting over the accusations against Trump.

Democrats argued they have clear evidence Trump tried to use a White House meeting and nearly $400 million in security assistance to Ukraine in order to pressure Kyiv to announce investigations that could benefit his reelection campaign.

Republicans have argued Democrats don’t have the facts to back up their allegations and hammered them for what Trump and his allies view as an unfair and partisan effort. They have also minimized the articles drafted by Democrats, saying they don't accuse Trump of a crime.