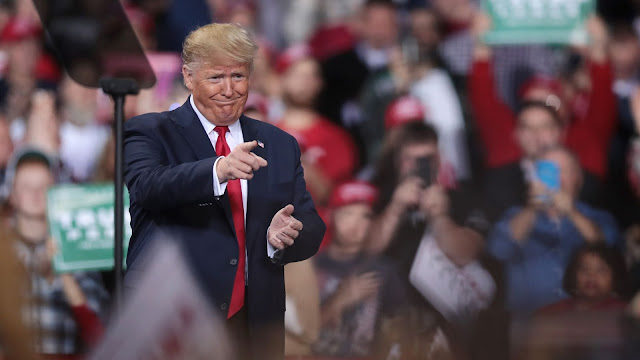 President Trump was standing on stage at a campaign rally in Michigan on Wednesday bragging about establishing a Space Force when the House voted to impeach him for abuse of power.

He was recounting the “incredible evening” when he won the 2016 presidential election against Democrat opponent Hillary Clinton and mocking his potential 2020 rivals in familiar fashion when House Democrats impeached him for obstruction of Congress.

Then the president turned his attention to impeachment, casting Wednesday night’s historic vote as an attack on his supporters and accusing Democrats of a “perversion.”

“With today’s illegal, unconstitutional and partisan impeachment, the do nothing Democrats… are declaring their deep hatred and disdain for the American voter,” he told a raucous crowd. “This lawless, partisan impeachment is a political suicide march for the Democrat Party.”

Trump interrupted his own remarks at 9 p.m. to inform the audience that Republicans had remained unified in voting against the articles of impeachment.

“The Republican Party has never been affronted, but they have never been so united as they are now,” he said.

The president predicted that the impeachment vote would have lasting consequences for Democrats, asserting their “depraved actions” would amount to “an eternal mark of shame.”

He took personal jabs at key figures in the impeachment proceedings. He chastised Speaker Nancy Pelosi (D-Calif.) – claiming Americans would “vote her the hell out of office” –  and mocked the appearance of House Intelligence Committee Adam Schiff (D-Calif.).

“He’s not exactly the best looking guy we have ever seen,” Trump said.

And he showed no remorse for his actions toward Ukraine’s president that touched off House Democrats’ impeachment inquiry, reiterating that he did nothing wrong and accusing Democrats of a political exercise.

Trump defended in detail a rough transcript of his call with Ukrainian President Volodymyr Zelensky during which he asked Kyiv to “look into” former Vice President Joe Biden and his son’s dealings in Ukraine, and noted that Zelensky has said he felt no pressure on the call.

“They don’t even have a crime. This is the first impeachment where there’s no crime,” Trump said.

Trump’s words marked his first public, on-camera remarks on impeachment since the House began a highly partisan debate on articles written by House Democrat leaders accusing him of abuse of power and obstruction of Congress him on Wednesday.

The president took the stage just after 8 p.m. as debate wound down on two articles of impeachment against the 45th president of the United States.

At almost the same moment the House began voting on the first article of impeachment, Trump declared to his supporters that “it doesn’t really feel like we’re being impeached.”

The timing made for a remarkable split-screen moment.

Trump rally soundtrack standards like Frank Sinatra’s “My Way” and The Village People’s “Macho Man” blared from the arena as Republicans jeered House Majority Leader Steny Hoyer (D-Md.) as he spoke of duty and the limits of party loyalty.

Vice President Mike Pence, who had been campaigning earlier in the day in Michigan, took the stage as House Minority Leader Kevin McCarthy (R-Calif.) offered a final defense of the president before the House moved to votes.

Trump took the stage fully aware that was about to become just the third U.S. president to be impeached by the House of Representatives. But he mostly avoided the topic as his fate was sealed in the nation’s capital, instead boasting about the economy, bashing a lone protester and riffing on the size of his rally crowds.

In many ways, the rally resembled many of Trump’s past campaign appearances. He admonished the media for its coverage of his White House, touted his efforts to cut “deals” that benefit the American people, and emphasized his pledge to rebuild the U.S. military.

Trump took a victory lap over the negotiated deal on the new United States-Mexico-Canada Agreement (USMCA) and his “phase one” trade agreement with China.

Trump also blasted the FBI investigation of his campaign’s contacts with Russia in 2016, seemingly linking it to the impeachment inquiry and claiming Democrats “shouldn't even be able to have an impeachment, because it was based on dishonesty.”

The House approved articles of impeachment accusing Trump of abusing his power in his dealings with Ukraine and obstructing the congressional inquiry in a party line vote, with no Republican support and two Democrat defections. The first article passed by a vote of 230-197, while the second article passed 229-198, with Rep. Tulsi Gabbard (D-Hawaii) voting present each time.

Trump in a July 25 call with Zelensky asked Kyiv to “look into” a debunked theory about 2016 election interference and the Bidens; House Democrats, equipped with other witness testimony, have accused Trump of abusing his office to pressure a foreign country to launch investigations that could benefit his reelection campaign.

Trump’s rally took place in the home district of Rep. Justin Amash, a former Republican who became an independent over the summer and voiced support for impeachment on the House floor earlier Wednesday.

The White House said in a statement that Trump spent the day working, though he only had one briefing on his public schedule and was active on Twitter throughout the morning and early afternoon firing off personal attacks against Pelosi and all caps missives decrying the impending vote.

He has spent months angrily denouncing the entire proceeding as a politically-motivated “sham” and a “hoax,” a tirade that culminated Tuesday in a scathing letter to Pelosi that accused Democrats of “subverting American democracy” and insisted history would vindicate him in language that at times mirrored Trump’s Twitter feed.

Still, White House aides have done their best to argue Trump is unfazed by the black mark that was about to be tattooed onto his legacy.

“Nobody’s fine with somebody who should not be impeached… being impeached, but his mood is fine in that today is just kind of an add water and stir kind of day,” White House counselor Kellyanne Conway told reporters before Wednesday’s vote.

Trump has at times shown an awareness of the historical weight Wednesday’s vote carried for his presidency, saying he doesn’t like being associated with a “dirty word.”

The president on Wednesday was bullish, however, that history might look more kindly on his case than that of former Presidents Bill Clinton or Andrew Johnson, or even Richard Nixon, who resigned before he could be impeached.