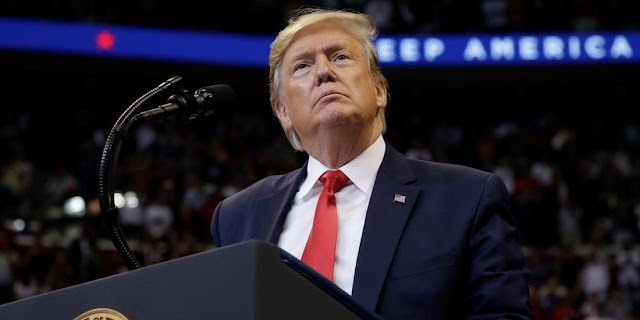 President Trump is hoping to turn the dubious distinction of impeachment into a rallying cry in his reelection bid.

Trump has long cast himself as a Washington outsider unwelcome by establishment politicians, and allies say he is likely to use the partisan impeachment votes to entrench that image and energize supporters on the campaign trail.

"I think it plays into an overriding message that I know the president and his team have been pushing for a while now,” one former White House official said.

While the House vote on Wednesday made Trump just the third U.S. president to be impeached, he will be the first to seek reelection with the notorious label attached to his name.

The president's campaign has already set out to portray impeachment as a boon to its strategy. It has released limited but favorable polling data showing impeachment is unpopular in certain swing districts, and the campaign boasted eye-popping fundraising totals on the heels of Wednesday's vote.

Gary Coby, the campaign's digital director, tweeted Friday that more than $10 million in donations had rolled in during the previous 48 hours.

Trump rode a populist wave to the White House in 2016 after a campaign in which he pledged to "drain the swamp" and railed against "elites" in the nation's capital.

That rhetoric has endured even after nearly three years in office, and Trump's allies and advisers believe the fact that no Republicans voted for impeachment will allow Trump to frame that debate in similar "us against them" terms.

"It allows him to, I think, rightly argue that from the moment he was elected, Democrats weren’t interested in holding hands with him and working with him," the former White House official said. "They were only interested in removing him from office."

The House voted to impeach Trump for abuse of power and obstruction of Congress. Three Democrats opposed one or both of the articles.

The Trump campaign this past week highlighted the split screen of Democrats voting to impeach Trump without Republican support as the president rallied with thousands of supporters in what will be a pivotal swing state in 2020.

The president spoke for just over two hours on Wednesday night in Michigan, his longest campaign rally to date. He attacked Democrats in increasingly personal terms and sought to paint impeachment as a direct assault on his base.

"The do-nothing Democrats," Trump told the crowd in Battle Creek. "All they want to do is focus on this ... declaring their deep hatred and disdain for the American voter."

"This lawless, partisan impeachment is a political suicide march for the Democrat Party," he added.

But those close to the White House and political experts have acknowledged it's unlikely impeachment will be a driving force in the news cycle a few months from now, much less when voters head to the polls in November.

"I just don’t think it’ll have any impact," said Mark Rom, a professor at Georgetown's McCourt School of Public Policy.

"I think it’ll be a purely partisan election," he added. "I don’t think things will play out any differently than if he hadn’t been impeached. I think this is just seen as politics as usual."

Polls show the country is evenly divided between those who want Trump impeached and removed from office and those who don't, with those views hardening along party lines in the final days before Wednesday's vote.

Trump will be able to milk at least another month out of impeachment to rev up his supporters as the process moves over to the Senate.

The president has appeared eager for a Senate trial to acquit him, but that will have to wait since Congress is out until early January and the parameters of the trial are still up in the air.

Trump has publicly attempted to downplay his concern about the historical implications of being impeached, referring to the two articles as "impeachment lite" and telling reporters on Thursday that "it doesn't feel like impeachment."

Ivanka Trump, the president's daughter and senior White House adviser, told CBS's "Face the Nation" in an interview set to air Dec. 29 that her father is feeling a mix of anger and enthusiasm that she expects will trickle down to his base.

"He's energized, as are 63 million-plus voters who elected him to office," she said.

"There can be anger — anger at the opportunity cost to the Americans we're all here serving and what could have gotten done," she continued. "Angry at the waste of time, angry at the collateral damage. Angry, but it's still energizing."